Why India is arming Armenia against Azerbaijan

The Cradle, Coctober 15, 2022 — Trade routes and national security interests in the South Caucasus are central to New Delhi’s decision to arm Armenia.

After the 2020 Nagorno-Karabakh war and the shift in the South Caucasus balance of power toward Turkey, India has expressed concern that its vision to connect Europe and Russia to its Indian ports through the International North-South Transport Corridor (INSTC) could be jeopardized.

From New Delhi’s perspective, the increase of Turkish influence in the region is particularly troublesome given its arch-enemy Pakistan’s excellent ties with Ankara, and Islamabad’s support of Baku during the Nagarno-Karabakh war.

It was within this context that India joined Iran to send harsh diplomatic messages to Azerbaijan during the conflict. On several occasions, New Delhi called on Baku to pull back its forces from Armenia “immediately” and refrain from further provocation.

These concerns became all the more pressing when following its victory in the war, Azerbaijan launched an incursion on Armenia’s sovereign territory in May 2021 – and again in September 2022 – by attacking Armenian bordering villages killing more than 200 soldiers and civilians.

When Baku launched the September attack, Arindam Bagchi, the spokesperson of India’s Ministry of External Affairs, weighed in, urging “peace and stability in the South Caucasus region” as vital from a “regional security perspective.”

Similarly, on 15 September, after Azerbaijan’s attack on Armenia, India’s representative to the UNSC meeting called on the “aggressor to immediately cease hostilities.”

The reason behind India’s unease over continued instability in the region is largely over fears that it may threaten the security of the INSTC, where both India and Iran are encouraging Armenia to play an important role connecting the Persian Gulf to the Black Sea.

Concerned that the budding Turkish-Azerbaijani-Pakistani axis would endanger its grand connectivity project and become more assertive in other regions such as Kashmir, India stepped in to fill the void left by Russia’s Ukraine-distraction to secure its regional geopolitical and geo-economic interests by striking an arms trade with Yerevan.

While Armenia had shown interest in Indian military hardware prior to the 2020 Nagarno-Karabakh war, it was only in that year that Yerevan stepped up to sign a $40 million arms deal with New Delhi for the supply of four SWATHI weapons detection radars.

The radar system has been designed to the specifications of the Indian Army: to track incoming artillery shells, mortars, and rockets and provide pinpoint locations of enemy launchers and positions.

Since June 2022, rumors had swirled that Armenia was quietly negotiating the purchase of Indian drones, anti-drone air defense systems, and rocket launchers. The speculation was confirmed in late September when Indian media reported that New Delhi will be exporting missiles, rockets, ammunition, anti-tank missiles (ATGM), and the indigenous Pinaka multi-barrel rocket launcher (MBRL) system to Armenia.

These weapons alone are not sufficient to boost Armenia’s defense capabilities: both the Pinaka MBRL system and the ATGM are unable to combat the Turkish or Israeli-made drones in Baku’s arsenal, as Armenia lacks proper air defense mechanisms.

Indian military experts and former generals argue that the Pinaka alone is not sufficient as Armenia needs “BrahMos” and “Akash” missiles to “break the opponents’ teeth.”

“In war, hammers aren’t the right way ahead to kill flies. One must carry out a threat assessment, after which the correct weapons can be chosen. A ‘transparent’ battlefield allows wise choices to be made. An Indian assessment team could identify the real battlefield problems and then suggest what India could provide at a reasonable cost.”

This argument correctly assesses the outcome of the 2020 war in which Turkish Bayraktar drones decimated entire Armenian tank columns and rocket launchers, as Yerevan lacked an air defense system to hinder the drone attacks.

These experts argue that Armenia should therefore seek to purchase India’s indigenous “Akash” missile system, a surface-to-air system has been proven to successfully intercept drones and aircraft, which would enhance Armenia’s immunity against future drone operations.

Nevertheless, such improvements would still not be enough to significantly alter the regional balance of power.

Furthermore, Israel, a country heavily invested in Indian defense capabilities, may also have a say in some of these arms exports. Tel Aviv’s close relationship with Azerbaijan to counter Iran in the South Caucasus may ultimately prevent or restrict the sale of heavy weapons to Armenia.

What’s behind the arms deal?

Instead, in India, Yerevan has found a means to diversify its economic and political ties – a prudent move, as India views Beijing’s BRI initiative as a rival project to its INSTC.

On another front, Beijing is also advancing its Middle Corridor (also known as the Trans-Caspian International Transport Route, or TITR), connecting mainland China with Central Asia via Kazakhstan, and then onto Azerbaijan, Georgia, and Turkey, before heading to Europe. This corridor is also crucial for Europe as it bypasses Russia.

The importance of this corridor became significant as Azerbaijan and Turkey began pressuring Armenia to give up its southern border with Iran and establish the strategic Zangezur Corridor where Azerbaijan would be directly linked to Turkey. 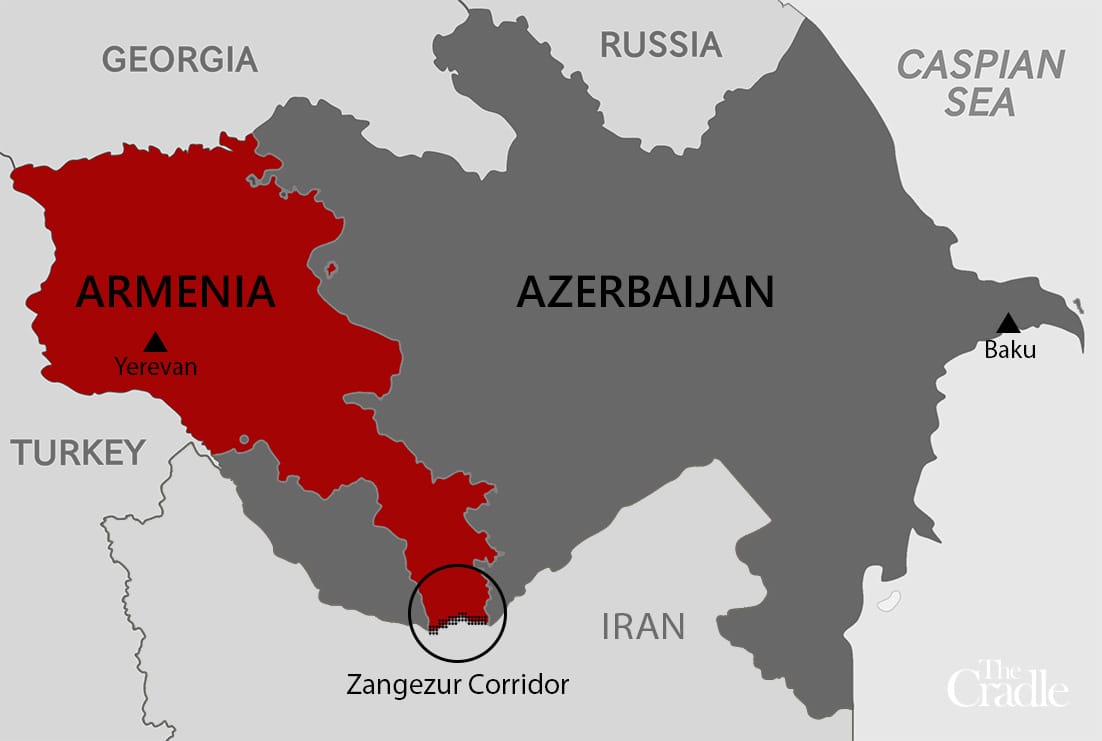 This alarmed both Iran and India, who realized that their mutual geo-economic interests would be threatened along their north-south trade routes.

For this reason, Tehran and New Delhi began to actively urge Yerevan’s participation in the INSTC and the Iranian-backed Black Sea – Persian Gulf Transport Corridor initiatives. Among the benefits of joining the INSTC, Armenia will have transport access to the Iranian Chabahar Port, the Persian Gulf, and Indian markets.

The author argues that Turkey and Azerbaijan have always supported Pakistan against India over the issue of Kashmir, and in return, Pakistan has fully-backed Azerbaijan in its war with Armenia over Nagorno-Karabakh.

According to Samanra, if this axis is cemented in the South Caucasus it will move southwards and the “three brothers” will act jointly in other theaters – including ‘Pakistan-occupied Kashmir’ – given their “existing political understanding on the subject.”

India is also concerned that Pakistan may bring China into this axis, which will undermine India’s national security. Hence, it is in “India’s interest that Armenia puts up a stand and not be trampled upon because of a power vacuum (in South Caucasus) caused by Russia’s preoccupation in Ukraine.”

Countering Baku or proxy against Pakistan?

Both India and Armenia stand to benefit from these arms deals. If the Indian weapons prove effective in battle, it could boost India’s prestige in the global defense industry and increase interest by other states to procure arms from New Delhi.

Moreover, by arming Armenia, India can use the country as a deterrent force against the emerging Turkish-Azerbaijani-Pakistani axis. Aside from Afghanistan, Armenia will be the first near-abroad counterweight against Islamabad’s activities deemed to pose a threat to India’s security interests.

By strengthening its current ties with New Delhi, Armenia can become a strategically significant partner for India, where the latter can establish commercial and defense hubs for joint Armenian-Iranian-Indian goods to be exported to Russia and Europe.

Armenia, firmly embedded within Russia’s sphere of influence, will serve as an additional advantage for India, as this flourishing partnership would further boost India’s north-south economic corridor in the South Caucasus.