Why America Aims to Deindustrialize Europe

Eric Zuesse, Global Research, December 8, 2022 — Imperialism has always been — and always is — control of foreign governments. This is especially control of those governments’ foreign policies — international trade, military, diplomatic, etc., and not merely (if at all) domestic policies (which always are of far less concern to the rulers in the imperial nation — in this case, America).

The present article is dense (containing as much information as perhaps a normal article that’s five times as lengthy) and so it needs to be read slowly, but the topic is crucially important for all Europeans; and is essential for Europeans in order for any democracy to be able to exist in Europe (since democracy is impossible if the public are ignorant or deceived — as is commonly the case):

Prior to the 1991 end of the Soviet Union, America’s imperialism used its European colonies (called “allies” — and which any empire’s colonies or vassal-nations necessarily will be, since the colonies’ foreign policies are always controlled by the imperial nation) as providing military bases (locations to position imperial troops and weapons in order to further-expand the empire), and as being markets for U.S.-manufactured goods, not as being lands from which to extract resources (the traditional “banana republic” vassal-nations).

Military bases continued to be the top (#1) U.S. priority, despite the end of the Soviet threat and Russia’s adopting a democratic Constitution — a Constitution far more democratic than almost any in Europe — and this continued U.S. European military alliance, NATO, demonstrated, and actually proved, that America is imperialistic and had come to be the world’s dominant empire after the Soviet Union’s end. However, increasingly after that time (1991), the second priority, of using Europe as the biggest market for U.S. goods and services, declined. On 9 October 2018, the St. Louis Federal Reserve Bank published “Understanding the Roots of the U.S. Trade Deficit” and reported three “Key Takeaways”:

1. Profound economic changes lie at the root of both the U.S. trade deficit and declining manufacturing employment.

2. The role of the U.S. dollar as an international reserve currency has helped finance domestic consumption of imported goods.

3. Labor productivity and a shifting of comparative advantage to developing nations explain the loss in manufacturing jobs.

READ MORE: US-NATO Goes Global: NATO Declares Its Intent to Include All Countries. Conquer and Control the Entire World

That same study also included this key passage, which pertained to President Richard Nixon’s having gotten America off the gold standard and onto its replacement, the oil standard (with the Saudis):

As saving and investment became mismatched, the saving gap (S[avings] – [minus] I[nvestment]) started to grow more and more negative around the early 1970s [the end of the gold standard], suggesting rapidly accumulating private debt and public debt in the U.S. Figure 2 shows that the cumulative saving-investment gap started to grow in the middle 1970s and ballooned to $11 trillion in recent years, suggesting roughly an equal amount of foreign holdings of U.S. currency and government bonds. 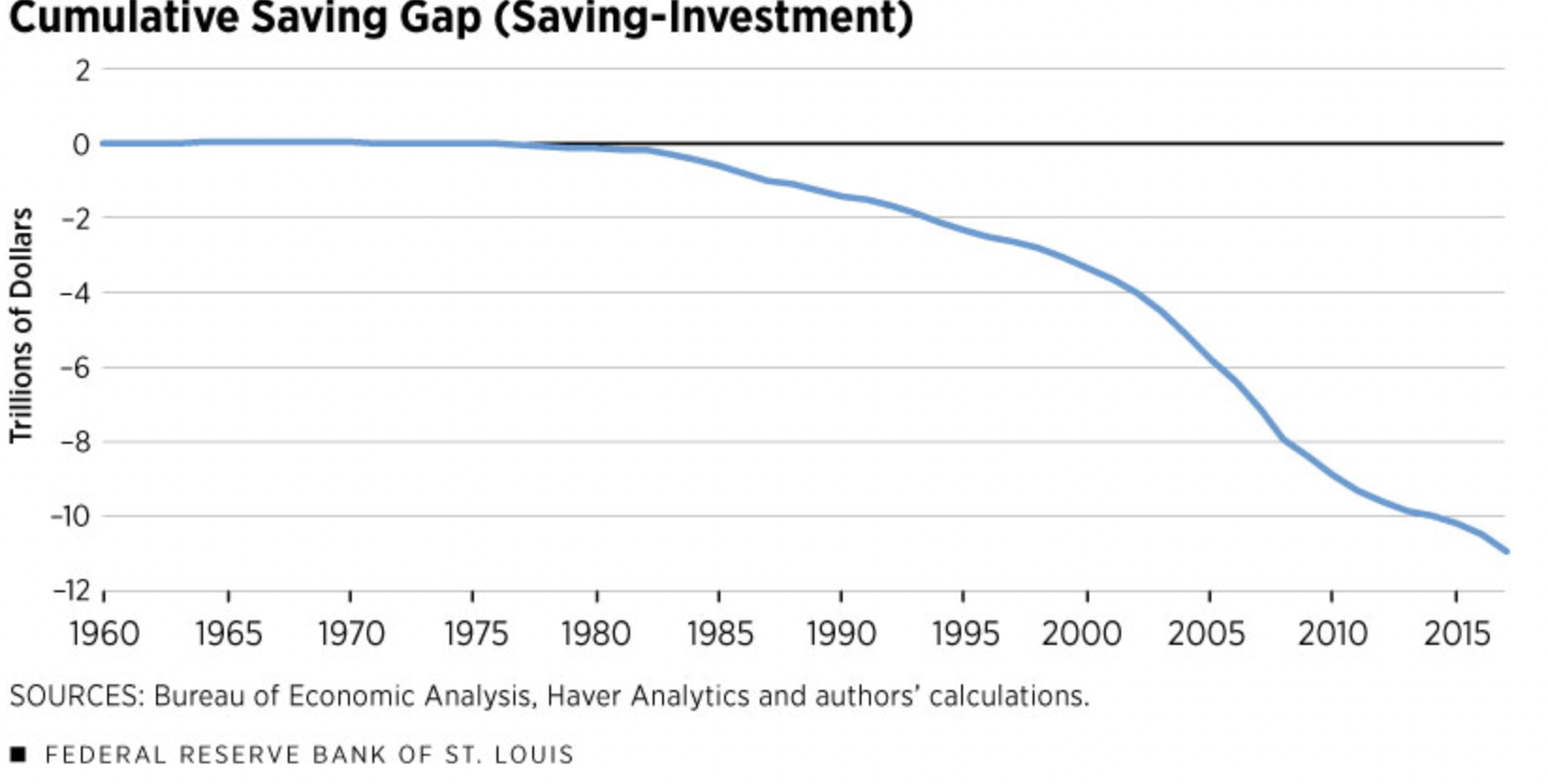 Therefore, the current international monetary system — based on the U.S. dollar as the dominant world reserve currency and U.S. government securities as the most-sought-after store of value — is the root cause of persistent trade deficits in the U.S.

Had the [gold-based] Bretton Woods system been kept in place, the U.S. ability to issue an astronomical amount of U.S. dollars and Treasuries as a substitute for gold in the global market would have been severely constrained, and U.S. trade would have been far more balanced.

However, though that explanation explains why the “Cumulative Saving Gap” didn’t exist, at all, prior to ending the gold standard, the explanation ignores one critically important aspect of the curve that is displayed in “Figure 2” and which aspect is an accelerated increase in that gap (increased downward turn) after around the year 2001.

What had happened in 2001? The 9/11 attacks and the effective elimination of Constitutional rule in the United States: the extreme militarization of America’s economy, and thus the INCREASED importance, to the American economy, of those manufacturing jobs which relied upon the CONTINUED and increasingly important European military market. (For a while, after 9/11, many of the main purchasers of U.S. weapons were in the Middle East, which is the #2 foreign profit-center for U.S. arms-makers, especially because it is heavily subsidized by U.S. taxpayers. But the war in Ukraine, which Obama started, has restored the Cold War to arms-trade dominance.)

America wouldn’t be able to sell to China the weapons that the U.S. was manufacturing to be placed in Europe. America’s NATO (the Cold-War relic) was Euro-American, not Sino-American. Consequently, America needed to increase yet further its grip over European Governments: it therefore must treat them more openly, and more boldly (such as America’s and UK’s joint operation of blowing-up the Nord Stream pipelines of Russia’s energy supplies into Europe) as being banana republics, and to do whatever is needed in order to get these Governments to comply with U.S. demands (such as to comply with Washington’s secondary sanctions against Russia and against Iran).

Whereas the 9/11 event ‘justified’ America’s emergency rule and its increased weapons-sales, this impetus was waning as an excuse for continuation of the empire; and, so, when Barack Obama came into office in 2009, he promptly re-oriented toward the old Cold War targets, anti-Russia and anti-China planning and policies (his TTIP, TISA, TTP, overthrow-Assad, and overthrow-Yanukovych, etc. — overthrow any nation’s leadership that is at all friendly toward Russia and/or China), and this required him and Joe Biden to force Europe to commit to anti-Russia and anti-China policies; and, so, it required to split the world into a renewed Cold War without any need for an ideological (anti-‘communist’) excuse.

The only way to do this is to deindustrialize Europe. So: that is now happening. Europe is to become more of America’s banana-republics. That’s why the Biden Administration is determined to take manufacturing jobs away from Europe.

The U.S. Government’s, and its think tanks’, many policy documents that focus upon an alleged need to continue and to expand U.S. global hegemony, are unapologetic about America’s zero-sum-game view that in order for the U.S. to succeed, the nations that it views as ‘competitors’ (by which they actually mean enemies) must be defeated.

And all other nations must continue to be dominated by America.

The U.S. is not treating Europe (other than Russia) as enemies; it isn’t threatening them as being targets of America’s bombs; but it is instead treating them as ‘allies’, or vassal-nations to be used as staging-areas for its ultimate invasions to defeat its ‘competitors’.

This entails treating Europe as banana republics, specifically of a military type. Ending NATO would be unacceptable to the people who control America, because it would end that. However, any creation of a solely European military alliance against Russia and/or China, would ultimately mean replacing NATO instead of ending it; and this idea, which has been proposed by Emmanuel Macron and others, would be only a nominal response to the problem. In order for Europe to free itself from the ever-increasing U.S. vise-grip, what’s needed would be to end NATO and accept into its own ranks Russia and an authentically continent-wide, EurAsian (no longer the existing artificial “European”) vision of its own future, instead of to fight against it as America’s rulers insist must continue to be done. The “Old World” will then become “the New World” of the future, while “the New World” of the Western Hemisphere will decline into no longer being the #1 threat to peace as America is and actually has been ever since 25 July 1945. Europe needs to become part of the solution, and to quit being part of the problem.

This article was originally published on The Duran.

Investigative historian Eric Zuesse’s new book, AMERICA’S EMPIRE OF EVIL: Hitler’s Posthumous Victory, and Why the Social Sciences Need to Change, is about how America took over the world after World War II in order to enslave it to U.S.-and-allied billionaires. Their cartels extract the world’s wealth by control of not only their ‘news’ media but the social ‘sciences’ — duping the public. He is a regular contributor to Global Research.