Orinocotribune, July 30, 2022 — Venezuela and Colombia are advancing in a cooperative agenda to restore bilateral relations, announced Venezuelan President Nicolás Maduro during an event in La Casona Aquiles Nazoa, Caracas, celebrating the birth of Commander Hugo Chávez. He reported that the meeting between Venezuelan Minister of Foreign Affairs Carlos Faría and Colombian Foreign Minister-elect Álvaro Leyva revolved around 14 issues, the most important of which was the restoration of Venezuela-Colombia relations.

In this regard, the topics addressed were the new opportunities for the border region and the entire western region of Vnezuela; joint plans for peace and security; and the progressive, economic and commercial opening of the border. “It was a virtuous meeting, one of unity in the spirit of Bolívar, it was a meeting that tells us that the future to come will be better,” said the Venezuelan president.

President Maduro thanked Colombian President-elect Gustavo Petro for having sent the diplomatic representative of his government to recover the centuries-old relation between the two countries.

“Colombia and Venezuela meet again in peace, love and freedom, looking forward to the future,” President Maduro said, referring to the conversation between the foreign ministers of Venezuela and Colombia.

He added that Bogotá and Caracas have to go forward together, under a single ideal: peace, collaboration and integration.

Earlier, Venezuelan Foreign Minister Carlos Faría announced that the two countries will restore diplomatic relations at all levels, starting with the appointment of ambassadors, once Petro takes charge of the presidency of Colombia on August 7.

Joining the celebration on the occasion of the 68th anniversary of the birth of Hugo Chávez, President Maduro said, “Today when Chávez turns 68, we can say that we are united, in combat, looking towards the future with a smile, with certainty, hope and optimism.”

RELATED CONTENT: Hugo Chávez, Leader of the Bolivarian Revolution, Was Born 68 Years Ago 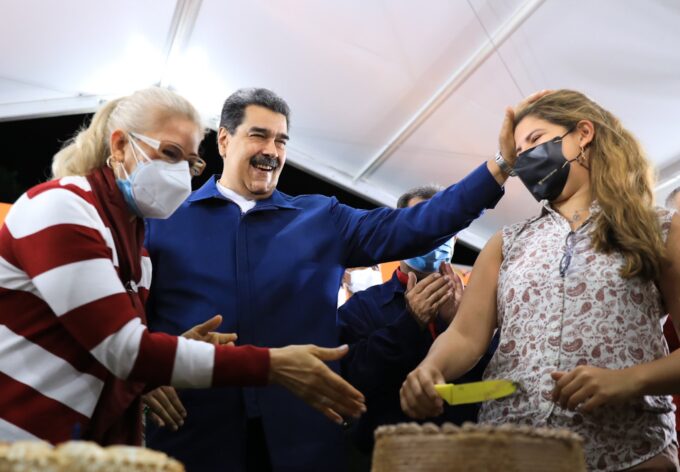 Singer, songwriters, artists, and relatives and friends of Chávez were present at the event held in La Casona Aquiles Nazoa. President Maduro highlighted that thanks to the unity of patriots who believe in chavista ideals, Venezuela has been able to confront and defeat all threats, conspiracies and attempts at division. “Chávez is among us and is still here in our battle, giving us his strength,” he concluded.