Lucas Leiroz de Almeida, Global Research, November 25, 2022 — Even in the midst of a high-intensity military conflict, one of the main priorities of the Ukrainian authorities is to attack Russian culture and history. The local administration of Odessa recently approved the demolition of Russian monuments, including those of Empress Catherine the Great and Generalissimo Alexander Suvorov. The move shows how Kiev plans to advance its “de-Russification” project, which can only be stopped with a Russian military victory.

In the past, Goncharenko had already submitted to the mayor of Odessa, Gennady Trukhanov, a bill proposing the removal of the statue of Catherine the Great, but it had then remained unanswered, with the decision taking place now. Trukhanov participated in the statue’s installation nearly a decade ago, but now he seems to have adhered to the Russophobic frenzy that affects Ukrainian officials and their militant supporters. In November alone, the statue of Empress Catherine was attacked twice by neo-Nazi vandals, which shows the serious situation of anti-Russian sentiment among local political groups. 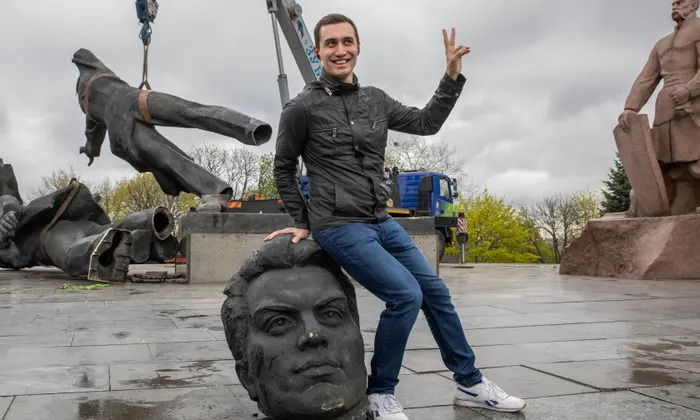 Previously, several other acts of vandalism had already been made against the statue, as well as petitions produced by neo-Nazi militants to demolish it. On July 5, for example, ultranationalist groups created an online petition proposing the replacement of the monument by a statue in honor of the American actor Billy Herrington, known for having worked in several pornographic films. Obviously, the proposal was a mockery and could not be taken seriously, but such is the depth of anti-Russian animosity in post-Maidan Ukrainian society that more than 25,000 people signed the petition – which was presented to President Volodymyr Zelensky himself, despite its grotesqueness. Surprisingly, in August, the Ukrainian president reacted to the petition asking local authorities to “consider” the demolition topic.

It is important to note how the decision to destroy such a monument constitutes a direct attack against the memory of Odessa itself, since it was Catherine the Great who founded the city by an imperial decree in the 18th century. Goncharenko even emphasized in his speech that this was an act against the “Odessa’s Founders”, making clear the intention of the Ukrainian authorities to erase their own history. The objective is to detach Odessa – and the entire Ukraine – from any cultural ties with Russia, destroying national memory and rewriting local history as being purely “Ukrainian”, without Russian participation.

Repeatedly, Zelensky commented on the alleged “necessity” to make Ukraine free of “Russian-related objects”. Several attacks on monuments of Russian and Soviet heroes have already been carried out in many regions of Ukraine. The conflict in Donbass itself was marked in its first days – 2014 – by the attempt on the part of the Ukrainian forces to remove a statue of Lenin, prevented by strong popular resistance.

It is also necessary to emphasize that Ukraine is not the only country going through such a process. The Ukrainian case is more serious because the country is under a neo-Nazi regime since the Maidan coup, but there are similar initiatives in all states that joined the Western-backed anti-Russian wave. In the Baltics, the removal of Soviet monuments has become common a practice, for example. And so, the countries that participated in Russian civilization in the past gradually try to erase or rewrite their history, considering this a kind of “cleaning”.

The demolition of statues is just one of the lines of action in this broad project to “cancel” Russian history. The rejection of Russian culture, language and art is also part of this problem. As well known, Ukraine has been promoting the elimination of Russian-language books – including translations of non-Russian authors – in recent months, and there have been even public book burning events. Indeed, if Kiev’s neo-Nazi regime lasts long, surely future generations will be educated with adulterated versions of their own history, believing that their ancestors were never part of the Russian civilization and that Russia has always been an “enemy”, “aggressor” country.

In fact, rewriting history based on racism and resentment is an intolerable practice. The only way to prevent cultural genocide against Russians and to preserve Russian memory in Ukraine is through military victory against the Maidan regime. Only by ending NATO’s proxy dictatorship it will be possible to promote conciliation between Russians and Ukrainians and keep the national memory, interrupting the racist and irrational hate instilled by foreign groups.

Lucas Leiroz is a researcher in Social Sciences at the Rural Federal University of Rio de Janeiro; geopolitical consultant. You can follow Lucas on Twitter and Telegram.