July 29, 2022 Leave a comment
Syria Support Movement, Global Research, July 28, 2022 — On July 12,  the UN Security Council extended the authorization for humanitarian aid to cross through Bab al Hawa on the Turkey-Syria border for another six months.  The US and allies had wanted a one-year extension, but Russia vetoed it.  The US, UK and France abstained on the six-month approval, while all others supported it.

There is much misinformation and deceit about the Bab al Hawa crossing in Idlib province, Syria. First, Western media rarely mention that after the aid crosses the border, it is effectively controlled by Syria’s version of Al Qaeda, Hayat Tahrir al Sham (HTS).

Second, they fail to explain that HTS hoards much of the aid for its fighters. When Aleppo was liberated by the Syrian Army, reporters found large stashes of medicines and food in their headquarters that were set aside for the use of the militia. Third, HTS makes millions of dollars by taxing the aid that it distributes to the rest of the population under its control.

What Is Wrong with the “Humanitarian Crossing” into Syria? 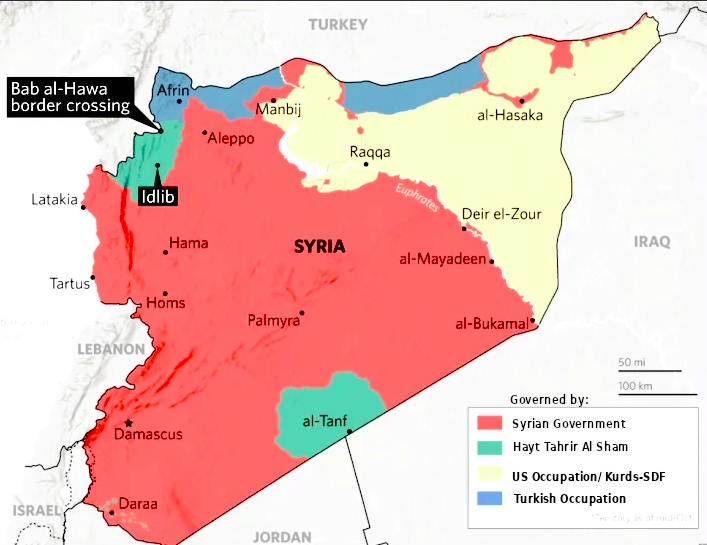 In May 2018, HTS was added to the US State Department’s list as a Foreign Terrorist Organization (FTO). HTS’s 15000 fighters are able to manipulate the numbers by including their names and the names of their accompanying families as civilians, thus receiving huge amounts of aid from UN agencies such as the World Food Program.  It is rarely mentioned that thousands of these civilians are not Syrian. They are Uyghurs and Turkmen supporters of Al Qaeda, from Turkey, China and elsewhere.

The Bab al Hawa crossing is also an entry point for weapons and sectarian fighters smuggled in with the copious aid. This is not new. In 2014, legendary journalist Serena Shim reported how she witnessed fighters and weapons entering Syria using World Food Organization trucks at Bab al Hawa. She was killed in Turkey two days after her report.

It is claimed over 4 million persons are in Idlib. That is a huge exaggeration. Before the conflict began in 2011 there were 1.5 million. When sectarian militants seized control, many civilians fled for Aleppo or Latakia. Even including fighters coming from other areas, the population is much LESS than before the conflict. The number of civilians in Idlib is grossly inflated for political and economic reasons.

The media also fail to mention that the aid across Bab al Hawa serves only the Al Qaeda-controlled area (the northern green section of the map) and not the rest of Syria. While western states send massive amounts of aid to this minority, the vast majority of Syrians suffer with little aid. Moreover, they are under the extreme US “Caesar” sanctions designed by the US to crush the economy by outlawing the Syrian Central Bank, make it impossible for Syrians to rebuild infrastructure, and punish Syrians and anyone who would trade or assist them.

Russian, Chinese and other representatives on the UN Security Council have pointed out that aid to Syria should be going through the UN recognized government in Damascus. Aid to civilians in Idlib should be distributed via the Syrian Red Crescent or a comparable neutral organization.

Providing aid through Bab al Hawa via hostile Turkey to an officially designated terrorist organization should be prohibited.  It is a clear violation of Syrian sovereignty. In December 2022, when the authorization again comes to a UN Security Council vote, the crossing may finally be shut down. At that point, the legitimate aid to civilians in Idlib province can be delivered from within Syria as it should be.