The UK’s 83 Military Interventions Around the World Since 1945

Mark Curtis, Global Research, January 11, 2023 — Britain has deployed its armed forces for combat over 80 times in 47 countries since the end of the Second World War, in episodes ranging from brutal colonial wars and covert operations to efforts to prop up favoured governments or to deter civil unrest

The British military has used or threatened to use military force much more in the postwar world than is conventionally remembered or believed. Declassified has documented 83 interventions by the UK armed forces since 1945, in 47 different countries.

The most striking of the British uses of force have been the overt invasions or armed attempts to overthrow governments such as in British Guiana (now Guyana) in 1953, Egypt in the 1950s, Iraq in 2003 and Libya in 2011.

The brutal colonial counter-insurgency wars of the 1950s and 1960s – in Kenya, Malaya, Aden and Cyprus – involved the widespread use of torture and, often, pernicious operations to displace large numbers of people to control the local population.

In Malaya between 1948 and 1960, British forces herded hundreds of thousands of people into fortified camps, heavily bombed rural areas and resorted to extensive propaganda to win the conflict.

British brutality fighting ‘Mau Mau’ forces in Kenya demanding independence from the UK resulted in tens and perhaps hundreds of thousands of deaths, often from starvation in concentration camps.

Click on a country here to see the number of interventions. 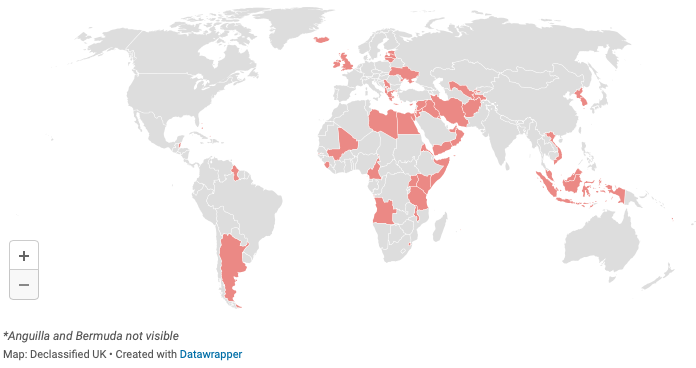 But this pattern of armed intervention – which was of course routine during the nineteenth century empire – was in the postwar period set immediately after Allied forces defeated Japan and Germany in 1945.

The deployment of force continued as routine over the decades, notably to prop up favoured regimes. Armed forces were dispatched to Oman (1957), Nyasaland (now Malawi, 1959), Brunei (1962), Anguilla (1969) and Jordan (1970) to bolster pro-British governments being threatened by independence or popular movements.

In 1964, British forces put down army mutinies in three countries in close succession in East Africa – Kenya, Uganda and Tanzania – to shore up pro-British governments just after they had become independent. 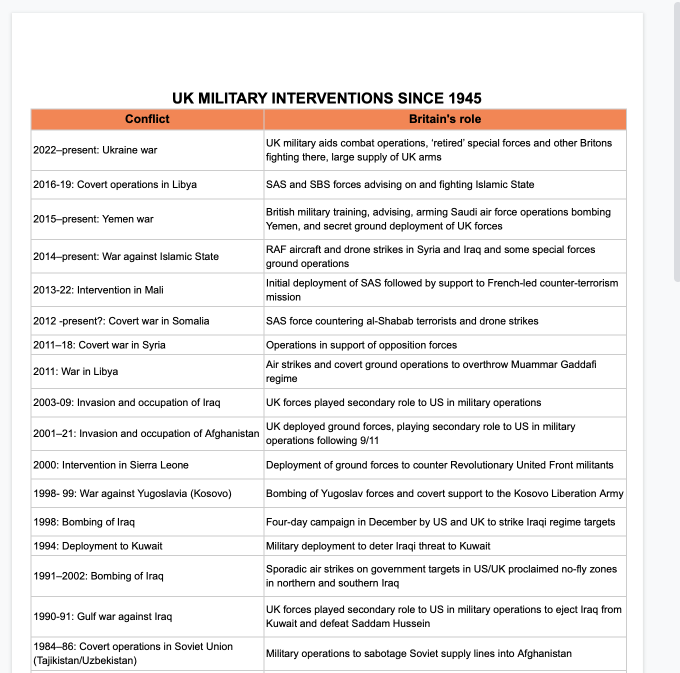 Covert military operations have been planned by Whitehall officials in numerous instances where their strategy would be unpopular at home or controversial abroad. British governments have if anything become less and less transparent about these covert operations over time.

The beginnings after the war were when UK forces sought to stir up opposition to emerging communist rule in Albania, Ukraine and the Baltic States in the late 1940s – operations which all failed to prevent these countries coming under communist control.

Covert wars continued in the 1950s in Indonesia – in an attempt to promote a rebellion against nationalist president Sukarno – and in the 1960s in Yemen – in a war to bog down the forces of Egypt’s leader, Gamal Abdel Nasser, in which tens of thousands of people died.

The strategy involved not only supplying arms and training for combat inside Afghanistan, but also the sabotage of Moscow’s supply lines inside the then Soviet republics of Tajikistan and Uzbekistan.

British covert operations have recently proliferated again in view of the unpopular wars in Iraq and Afghanistan. In 2011-13, Whitehall planners secretly launched at least four covert wars involving special forces on the ground in Libya, Syria, Somalia and Mali.

Some of the UK’s most brutal interventions have been with the US, notably the bombing of and occupation of Afghanistan after 2001, the UK’s supportive role in Washington’s near-destruction of Vietnam from the 1960s and the forcibledepopulation of the Chagos Islands from 1968-73, to make way for a US military base in the Indian Ocean.

After Iraq invaded Kuwait in 1990, the UK acted as the US’ junior partner in a ferocious bombardment of Iraq the following year that destroyed much of the country’s civilian infrastructure. Anglo-American bombing of Iraq continued for a decade after the Gulf War until the 2003 invasion.

On several occasions, the British military has been used to counter threats to favoured allies from neighbouring countries, such as the deployment to Kuwait in 1994 to deter a threat from Iraq’s Saddam Hussein and the dispatch of troops to Aqaba in Jordan in 1949 to fend off a territorial threat from Israel.

The UK intervened at least four times in British Honduras (which became independent as Belize in 1981) – in 1948, 1957, 1962 and 1977 – to deter Guatemala from its claims over the territory. The Falklands war of 1982 – after Argentina invaded the islands – was far from being the first time a Latin America state had claimed territory it saw as a relic of the colonial period.

Britain’s longest-running military deployment, lasting nearly three decades from 1969, was in Northern Ireland, where the armed forces and intelligence services’ countering of the IRA also involved sectarian support for, and collusion with, loyalist paramilitary forces that contributed to hundreds of further deaths.

Only a handful of these interventions might be regarded as truly benign. The UK’s deployment of forces to Sierra Leone in 2000 prevented the vicious Revolutionary United Front taking control of the capital, Freetown.

Britain’s involvement in the Korean war in the early 1950s – one of the most destructive conflicts of the past century – upheld the non-communist south of the country, and allowed a future South Korea to prosper.

But most of the UK military deployments have been to maintain colonial or postcolonial control of states and key resource interests, uphold British prestige or great power status, and demonstrate to the US – Whitehall’s key ally – that London is, with Washington, still prepared to continue to rule the world by force.

The list of interventions is far from exhaustive. It is unlikely to have found all the British military deployments for combat since 1945. Further, it does not include mercenary operations by British personnel, often backed by Whitehall, or purely intelligence operations to overthrow governments.

It also excludes military involvement in international peacekeeping missions, relief activities and actions to evacuate UK nationals from countries. Finally, it does not include training and advisory military operations which, often linked to British arms exports, are another key way Whitehall officials try to maintain their global influence.

Mark Curtis is the editor of Declassified UK, and the author of five books and many articles on UK foreign policy.