The Angry Arab: Putin And The Arabs

As`ad AbuKhalil, Consortium News, October 6, 2022 — The Arab public’s antipathy toward the U.S. determines their stance toward the Russian-Ukrainian war.

Writing on twitter a few days ago, the well-known Saudi intellectual, Khalid Ad-Dakhil, lamented the phenomenon of Arab support for Russian President Vladimir Putin.  He regards that a manifestation of “vengeful” thought.  He maintains, rightly, that some Arabs support Putin just to spite the U.S.

It is not easy to measure precisely the level of Arab public support for Putin in this current war; there have not been reliable opinion surveys that can guide us.  But the antipathy of the Arab public toward the U.S.  (and that has been well-documented consistently over the years and decades) determines their stance toward the current Russian-Ukrainian war. 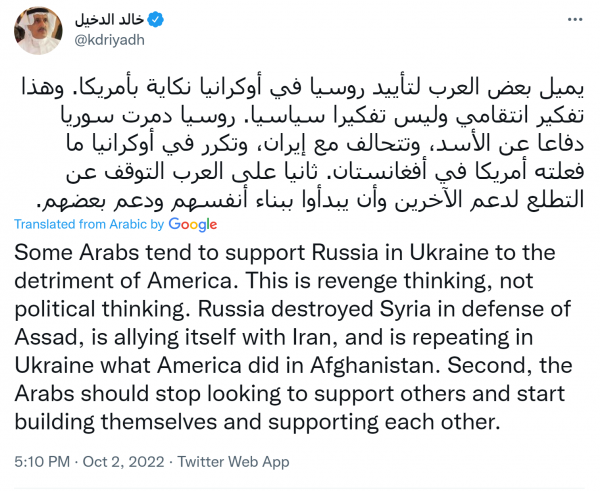 There are several reasons to make the case that Putin is not actually a friend of the Arab people.  After all, he steered the foreign policy of Russia in a more pro-Israeli direction ever since he took power.  The level of security and military coordination between Russia and Israel is at its highest, historically speaking.

The hundreds of Israeli raids over Syria in the last few years carry American and Russian imprints because both countries support the bombing. Russia could have easily deterred Israel, but it chose to give Israel the right to attack its closest Arab ally.

The U.S., of course, supports any and every Israeli bombing or killing campaign.  It is a matter of standard U.S. bipartisan policy.

As for Russia, Israeli coordinates closely with Moscow’s military activities in Syria, and Russia receives advance notice from Israel about bombing raids. Russia doesn’t seem to want to share the news of impending Israeli bombing with its Syrian or Iranian allies.  No Israeli raid over Syria would’ve been possible if Russia hadn’t given its approval.

To be sure, some Russian diplomats make statements to the effect that Israel is violating Syrian sovereignty or that Israel should respect the territorial integrity of Syria, but those statements are intended for the purpose of Russian propaganda directed at the Arab world.

[Related: Russia Hits Back at Israel Over Ukraine.]

But among some in the Arab world, especially in the mumana`ah camp (the word literally means refusal-ness, referring to the pro-resistance axis), there is support for Putin. Among some supporters of the Syrian regime he is sometimes nicknamed Abu Ali Putin, as a sign of Arab endearment. The title conveys macho toughness.

Supporters of Iran and Hizbullah often point out that they have their disagreements with the Russian government but they praise Russian military intervention in Syria (whether it was Iran or Russia that saved the Syrian regime is a matter of constant debate in the region).

Putin also represents a thread of Russian nationalism which is reactionary and fundamentally Islamophobic.  Putin’s record in Chechnya does not show him as a friend of Muslim peoples inside the Russian Federation.

Also, Putin does not make an effort to address himself to the Arab people but focuses on his one-to-one relationships with Arab despots, especially in the Gulf.  Putin seems to cultivate better ties with Gulf despots than he does with his ostensibly close ally in Damascus.

On the other hand, some Arabs make the case that Putin is preferable to any U.S. president.  Clearly, no state in the world has the record of the U.S. in launching wars and invading Arab and Muslim lands.

The increase in U.S. bombing in most Arab countries, and wholesale U.S. support for Israeli aggression and occupation, have made the U.S. consistently the most detested power in the world, according to the Arab population.

Russia would have to shower Israel with arms and money for many, many years and support it in all international disputes for it to achieve the status of the notorious disapproval of the U.S. in the Arab world.

But the Saudi intellectual cited above was correct in pointing out that the last speech by Putin may have been regarded sympathetically by the Arab population.  While the section addressed to the Russian people was rather reactionary and anti-PC, the part in which Putin listed a litany of complaints against the West historically must have been widely supported by Arab people, and by people of developing countries as a whole.

Even the part in which Putin railed against the liberal elite and the feminist and LGBT agenda, could have been met with approval by Arabs because the liberal sermonizing and hectoring to people of developing countries has in fact produced the opposite effect: it has rendered the entire feminist/LGBT agenda as suspect.

Western reaction to the Russian invasion of Ukraine has also rankled many Arabs. Many wondered aloud how the U.S. is so swift to condemn the violation of Ukrainian territory while Israel has been violating Arab territories consistently since 1948.

Arabs can’t miss the hypocrisy when U.S. officials rail against the principle of invading countries and bombing cities while remaining supportive of Israeli land grabs.

The U.S.  has been far more brutal in its wars in Arab and Muslim lands — without minimizing the civilian toll of Russian bombing in Ukraine — and that is on the mind of the Arab public.  How could the U.S., which dropped more bombs and missiles over Baghdad on the first day of the invasion of 2003 than Russia has dropped in months, feign outrage over Russian brutality?

The entire chorus of Western governments and media in expressing unqualified support for Ukraine’s war effort can be contrasted with Western insistence that Arabs refrain from any violent resistance no matter how brutal the occupation under which they suffer.

Iraqis who resisted U.S. occupation were called terrorists.  The racism of Western governments and media has been undisguised.  Western officials, journalists and human rights merchants express pain and sorrow at white casualties in Ukraine while they don’t even notice the semi-daily toll of Palestinian casualties (this year thus far, Israel has managed to kill 165 Palestinians in the West Bank and Gaza, to the disregard of Western media and public opinion).

In principle, Arabs and supporters of Palestine can and should support the principle of inviolability of countries in the face of aggression from powerful neighbors — and that applies to Russia in Ukraine. The entire Levant suffered since 1948 from wanton Israeli encroachment on the sovereignty and territorial integrity of countries.

Yet, Arabs are familiar with Western cynical machinations and calculations. They remember all too well how the U.S. and its allies exploited the suffering of the people of Afghanistan in the war against the U.S.S.R..

Arabs still suffer the horrors of violent groups like ISIS and Al-Qa`idah, both of which were born out of the U.S. covert wars in Afghanistan.  What we call in Arabic “Arab Afghans” is merely a code word for U.S. sponsorship of fanatical, violent Arab Muslims who were willing to employ terrorist methods to drive the U.S.S.R. out of Afghanistan (and those fanatics objected to the progressive agenda of Afghan communists).

Just as the U.S. used and abandoned the Afghan people, the people of Ukraine are being used by the U.S. for its objective of world domination.  Russia today is not the U.S.S.R. and Putin is far from Vladimir Lenin and other communists who believed in the struggle of people in developing countries.

The continuing Israeli bombing of Syria has proven to the Arab public that Putin seems more beholden to Israeli interests than to the interests of his one Arab ally who agreed to host a Russian military base.

Even pro-Syrian regime commentators have been complaining about the persistence of Israeli attacks on Syria under the nose of Russia.

As`ad AbuKhalil is a Lebanese-American professor of political science at California State University, Stanislaus. He is the author of the Historical Dictionary of Lebanon (1998), Bin Laden, Islam and America’s New War on Terrorism(2002),The Battle for Saudi Arabia(2004), and ranThe Angry Arabblog. He tweets as@asadabukhalil.