Prepping for a China War: The United States and the New Arc of Militarization Across Northern Australia

In recent years, successive Australian governments, in coordination with the United States, have responded to the dramatic rise of China with military and economic policies that directly challenge the possibility of accommodation with China.

In an arc of militarization across northern Australia, successive Australian governments, in close concert with the United States, have responded to the rise of a newly assertive China in terms that constitute an almost historically irrevocable opposition to any accommodation with China as a regional great power.

From the high-technology bases clustered along the length of North West Cape in Western Australia (including the newly built Space Surveillance Radar and the Space Surveillance Telescope supplying data on the position, behaviour, and character of adversary countries satellites), to the port and barracks and air base of Darwin, to the newly joint RAAF-US Air Force base of Tindal outside Katherine, to the deepening commitment to US global military operations, conventional and nuclear, of a rapidly expanding Pine Gap outside Alice Springs, Australia is joining the United States in preparation for war with China, most immediately over a war over Taiwan.

In part, this is nothing new. Post-1945 Australia, like some other liberal democracies allied to the United States, is a case of dependent, high-technology liberal militarization. This pattern is curiously hard for Australians to recognize – as always for states that valorize their liberal virtues, and especially so for those likely Australia founded on the untranscended, let alone fully recognized, mass violence of settler colonial conquest that is still unfolding.

Moreover, as this new phase of Australian militarization exemplifies, it reflects the character of American empire, one key part of which is the worldwide network of US and allied military bases and deployed military personnel, and most importantly, globally distributed elements of US-controlled but coalition-accessed space and terrestrial surveillance sensor systems, communications and computing systems – all tied to US and coalition military operations.

The material form of Australian high-technology alliance dependent militarization is manifest far from the population centres – socially and culturally out of sight, even when it is close-up, as in the small town of Alice Springs, next door to Pine Gap.

But the pace of militarisation, and the attendant loss of freedom of action for any independently minded Australian government, is quickening through preparations for the China target.

In the midst of this rush to join forces, in Canberra there is a profound lack of competent assessment within government and the wider alliance-dominated security policy community of whether or not Australia’s strategic interests and those of the US actually align over the Taiwan issue.

For Australia, the turmoil of structural and contingent disruptions in the world economy in the last few years are magnified by the implications of US security-directed economic and technological decoupling from China for an economy that I highly dependent on commodity exports to China – all against a background of historically constitutive racially-inflected ‘fear of China’.

US alliance structures are clearly changing shape. As has often been noted this year, the Russian invasion of Ukraine has revivified US dominance of NATO. Thus after two decades of Australian Defence Force high-tempo participation in NATO-auspiced coalition operations in Afghanistan, Iraq, and the Indian Ocean, the Australian military has become habituated to a new alliance role as an Enhanced Strategic Partner of NATO. 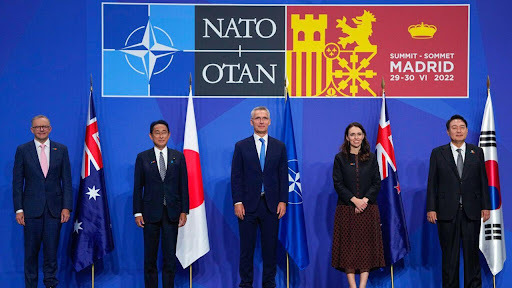 The dark follies of the AUKUS agreement to build Australian nuclear-powered submarines apart, there can be little doubt of the ultimate goal for Washington in the construction of ‘an alliance of democracies’ with global reach.

In the ‘Indo-Pacific’, the half century of US-centred hub-and-spokes alliance structures are noticeably beginning to be reshaped, again under US direction through:

Now, Canberra also seems increasingly drawn into a sense – increasingly prevalent amongst other US allies – that war over Taiwan, sometime soon, is ‘necessary’ and inevitable. The combination of Australian fear of China, the assertiveness of the current Chinese leadership, and the evidently successful US-led ideological construction of the binary identifications of ‘Russia = China, Putin = Xi Jinping, and Ukraine = Taiwan’ all combine with the hard-wiring of northern Australian military facilities into the US military force structure to drastically reduce the freedom of action of an independently-minded Australian government focused on the actual defence of Australia.

While nominally a joint Australian/US affair, the Joint Defence Facility Pine Gap outside Alice Springs is the largest US intelligence facility outside the US, equipped with some 45 antennas, mostly in radomes, as the visible expression the base’s surveillance role as ground station for US giant signals intelligence satellites and infrared early warning satellites, in addition to hosting antennas that collect signals downlinked from foreign communications satellites on an industrial scale.

Pine Gap, already large and now growing more rapidly than ever before, will play an irreplaceable role in US military operations from Africa to the Pacific and everything in between, both conventional and nuclear. All three of its surveillance systems have critical roles in US planning for a war with China over Taiwan.

Australian governments have long known, though rarely even hinted publicly, that they have known for half a century that Pine Gap was – and is – a high priority Soviet/Russian nuclear target in the event of major conflict with the US. The base remains so today for China, with roughly the same number of priority targets as Russia, but less than a tenth the number of long-range nuclear missiles that would be up to the task.

B-52s have been landing at RAAF Darwin regularly since 2013 after the Gillard-Obama Darwin basing agreement, but expansion of Tindal to meet USAF requirements for B-52 deployments would make permanent presence possible.

Moreover, the Morrison government’s 2020 commitment of $1.1 bn for the United States Force Posture Initiative Airfield Works Project Elements at RAAF Base Tindal will have to be re-framed while Canberra adjusts to the Pentagon’s newest plans for a B-52 Bomber Task Force on permanent rotation from their home base in Barksdale AFB in Louisiana.

According to Pentagon tender documents released by the Australian Broadcasting Company’s Four Corners, the US is planning yet further development at Tindal – beyond that acknowledged by the Australian government – for a USAF B-52 bomber task force on permanent rotation including an ‘aircraft parking apron to accommodate six B-52s’, a USAF ‘squadron operations facility’, plus USAF maintenance centre, fuel dump, and ammunition depot. One key tender document for the Pentagon’s B-52 deployment to Tindal was dated as recently as 22 September 2022. 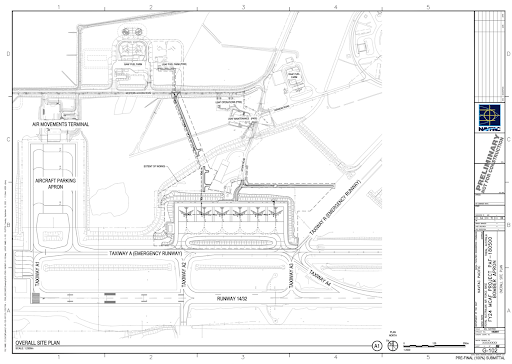 Tindal as Back Up for a Vulnerable Guam

For the Pentagon, a B-52 deployment to Tindal provides backup to the increasingly vulnerable Andersen AFB on tiny, heavily militarised Guam.

As former Deputy Secretary of Defence Paul Dibb put it on Four Corners:

America has to take out an insurance policy because a lot of its forward military bases in places like the island of Guam near Japan and elsewhere in the region are coming much closer to Chinese military strike capabilities.

But beyond the Tindal fallback factor, the USAF is banking on the RAAF contributing critical assets to Tindal-based Bomber Task Force operations towards China in the form of the RAAF’s E-7A Wedgetail airborne early warning and control aircraft, plus the RAAF’s long-range tanker capability, and F-35 multirole fighters.

While apparently unquestioned in Canberra, this unquestioned technical, doctrinal, and organizational integration of northern Australian military facility into US planning and preparation for an increasingly likely conflict with China has grave implications for Australian security.

There is one further urgent task involving planning for six B-52 bombers to be based on permanent rotation at Tindal. B-52-H bombers, albeit heading for their 70s, have been upgraded this year yet again and remain a frontline US strategic nuclear weapons platform. According to the Federation of American Scientists’ authoritative study United States nuclear weapons, 2021, of the 87 B-52s currently deployed by the USAF, 46 are nuclear capable, with each capable of carrying up to 20 nuclear-armed air-launched cruise missiles.

At present, the language of the B-52 permanent rotational deployment is in terms of training, as was the Fraser government’s 1981 agreement to allow B-52s on navigation training exercises into Darwin.

Fraser’s agreement required explicit Australian government prior approval of use of that access for any other purpose. We know nothing of the implementing agreements under the Morrison and Albanese government’s allowing the Tindal deployment.

The issue of the constraints on the deployment under an implementing agreement will become critically important in the event f a crisis-driven US decision to bring the B-52s into war.

The fabled doctrine of the Australian government controlling the uses to which the joint facilities can be put is phrased in legal agreements as our ‘Full Knowledge and Concurrence’ with American operational uses of Pine Gap, all the North West Cape cluster of bases, and now RAAF Tindal and more.

And yet, nuclear-capable B52 bombers at Tindal raise a fundamental issue for Australia which requires urgent clarification by the Albanese government: the prohibition under the Treaty of Raratongaestablishing the South Pacific Nuclear Weapon Free Zone, Article 5 of which begins, unambiguously:

‘1. Each Party undertakes to prevent in its territory the stationing of any nuclear explosive device.’

However, during the negotiations of that treaty Australia supported the position of the United States that any Pacific NWFZ must allow the transit of nuclear weapons on board visiting ships and aircraft, resulting in a second clause to Article 5:

‘2. Each Party in the exercise of its sovereign rights remains free to decide for itself whether to allow visits by foreign ships and aircraft to its ports and airfields, transit of its airspace by foreign aircraft, and navigation by foreign ships in its territorial sea or archipelagic waters in a manner not covered by the rights of innocent passage, archipelagic sea lane passage or transit passage of straits.’

The US – and Australian – intent was ‘No More New Zealands’, following the Langer Labor government’s banning of nuclear-armed or nuclear-powered warships in 1984.

While a normal interpretation of the meaning of ‘visits’ and ‘transit’ would not include something like permanent extensive rotation deployments, this second clause is now more deeply problematic than ever.

As a matter of urgency the Albanese government should declare that it accepts that under the South Pacific Nuclear Weapons Free Zone any deployments of nuclear weapons to Australia in any form or under any pretext will not be permitted.

The government must require the US to answer the key questions pertaining to its deployment of B-52s:

Australian government acceptance of statements that the United States will ‘neither confirm nor deny’ the presence of nuclear weapons in any form in Australia would constitute an abandonment of sovereignty.

Richard Tanter is Senior Research Associate at Nautilus Institute for Security and Sustainability and Director of the Nautilus Institute at the Royal Melbourne Institute of Technology. An Asia-Pacific Journal contributing editor, he has written widely on Japanese security policy, including ‘With Eyes Wide Shut: Japan, Heisei Militarization and the Bush Doctrine’ in Melvin Gurtov and Peter Van Ness (eds.), Confronting the Bush Doctrine: Critical Views from the Asia-Pacific. He co-edited, with Gerry Van Klinken and Desmond Ball, Masters of Terror: Indonesia’s Military and Violence in East Timor.

Militarization and US-China Confrontation in the South China Sea

Australia and the Road to Nuclear War