Nicaragua – A People as President and Their Municipal Elections

Stephen Sefton, Global Research, November 9, 2022 — Above all, last Sunday’s municipal elections on November 6th, were an optimal consolidation of the Nicaragua’s now serene and stable electoral culture, ensuring extremely efficient, orderly elections, and increased confidence for voters. The very high level of participation of Nicaragua’s young people and women in every aspect of the electoral process highlighted the profound democratization of Nicaraguan society that has taken place in the last fifteen years. Absent US and EU country interference, with its poisonous culture of corruption and violence, fear and hatred, last year’s national elections and these municipal elections of 2022 represent the triumph of Nicaragua’s sovereignty and the commitment of its population to Peace.

At an institutional level, the year-on-year progress of the Supreme Electoral Council in its increasing technical and administrative skills and in its communications and organizational capacity, have made both the voting process and the process of counting of votes highly efficient and reliable, a true model for the region. The collaboration of the country’s entire society, from the national universities to the National Police and the Nicaraguan Army and the various political parties, guaranteed the elections’ democratic integrity. The exceptional dedication, commitment and goodwill of the tens of thousands of people who provided their voluntary support to the electoral process ensured its undeniable sovereign legitimacy. 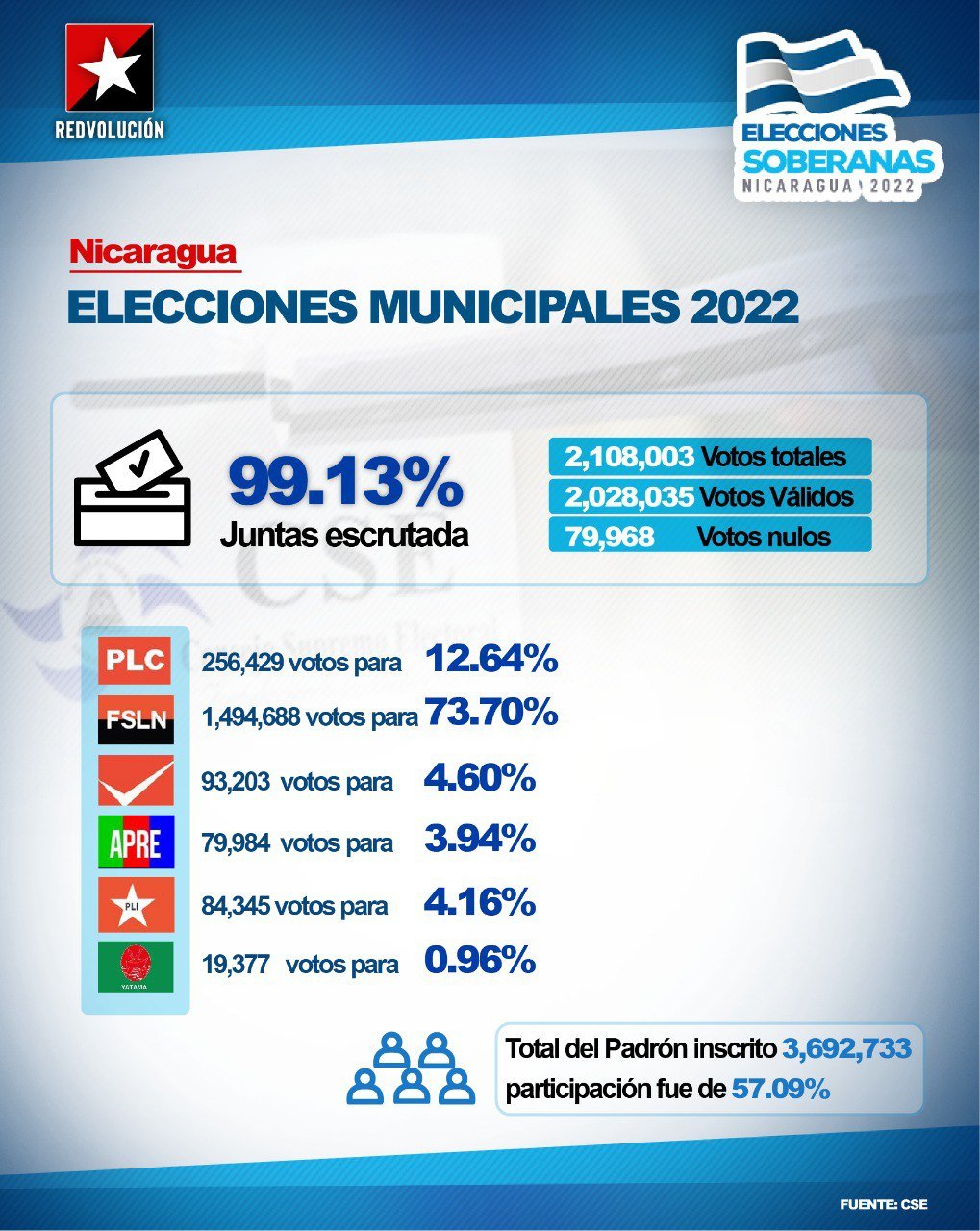 All day on that Sunday, tens of thousands of women and men voluntarily helped voters at the reception kiosks and at the polling stations or as electoral supervisory police. It is also important to note the essential role of the thousands of political party representatives who monitored the voting process for their respective political parties from the opening of the polls until their closure and then monitored the process of counting the votes. These municipal elections of 2022 have been the culmination in Nicaragua’s electoral history of the process of restitution of rights, of the People as President and the People as the protagonists of their local municipal authority.

After the controversial general elections of 1996, every municipal election exercise in Nicaragua has resulted in a progressive increase in support for the Sandinista National Liberation Front. In 2000, although it won in the municipality of the capital city, Managua, in the rest of the country the FSLN only won a total of 52 mayors nationwide. However, in the successive municipal elections that followed, the party’s popular support greatly increased. In 2004 the FSLN won 87 municipalities, in 2008, it won 109, in 2012 it won 127 and in 2017 it won 135.

The population of the municipality of Managua, with a third of the national population, has elected Sandinista mayors in every municipal election since 2000. Now in 2022, the FSLN has won all 153 municipalities in the country, even in the traditional strongholds of the national right wing parties, which , as usual, were hopelessly divided . The level of participation was 57% with an average vote in favor of the FSLN of around 74% and for the combined opposition parties an average of around 26%.

The Family-Party-State Nexus in Nicaragua

Throughout the past series of municipal elections and even more so with this latest electoral triumph of the FSLN, the population has come to rely more and more on the ability of the mayors and councilors of the Sandinista Front to improve the quality of life and the social and economic conditions of their communities. It is important to understand why the Nicaraguan people have demonstrated their confidence in the Sandinista Front in a progressively stronger way. The fundamental explanation is the revolutionary commitment of the FSLN to its historical program of 1969 and the development since January 2007 of a vision of the Common Good under a Government of Reconciliation and National Unity.

During the decade from 2007 to 2017, the government of President Comandante Daniel Ortega promoted and developed a successful consensus among virtually all sectors of Nicaraguan society. Everyone, apart from a small but vociferous recalcitrant minority, seemed to be in favor of social and economic stability and progress towards the much longed for realization of the Common Good. But, in 2017, the municipal elections of that year seem to have convinced the anti-patriotic opposition and their US and European owners that it would be impossible in the short or medium term to achieve an electoral defeat of the Sandinista Front and its alliance with other national political forces.

So the United States and its European Union allies encouraged their ciphers and pawns inside Nicaragua to mount the violent failed coup attempt of 2018. Then, during the following two years, repeated national surveys indicated that the vast majority of Nicaraguans wanted to resume the socio-economic course of the country set out by President Daniel Ortega and Vice President Rosario Murillo before 2018. The November 2021 national elections overwhelmingly confirmed that sentiment.

The People as President, the vast majority of Nicaraguans, ratified in those national elections the decisions and actions of the government, the National Assembly and the other institutions of the country to strengthen national sovereignty and defend Nicaraguan society actively against foreign interference, internal subversion and treason. This is the political logic that Nicaraguan society has followed, overcoming in short order the very serious economic and social effects of the failed coup attempt. The country has also overcome the health and economic consequences of Covid-19 and the severe lockdown measures applied internationally, which caused so much damage to economic and social activity in general around the world.

So, on the one hand, it is indeed reasonable to evaluate the results of these 2022 municipal elections as a kind of referendum on Nicaragua’s national policies in the regional and international context. The results have been a forceful vindication of the government of President Daniel Ortega and Vice President Rosario Murillo. On the other hand, it is impossible to assess adequately these local election results in terrms of the People’s control over their local municipal authorites without taking into account the central government policies that have reinforced and complemented the municipal authorities’ capacity for implementing programs and projects promoting the economic, social and cultural development of their municipalities. National Assembly deputy Carlos Emilio López highlighted this in a recent article:

As Carlos Emilio points out in his article, Nicaragua’s Law 466 guarantees transfers from central government to the municipalities which now amount to 10% of the national budget, under rigorous control to ensure its efficient and transparent use. But it is also worth emphasizing the range of central government actions integrally linked to development at the local government level. There are many examples.

The installation, fitting out and equipping of 156 new fire stations in almost all municipalities of the country has greatly strengthened the capacity of local civil defense. Apart from allowing better control of fires and accidents, these emergency facilities strengthen the municipal structures of the National System for Disaster Prevention and Mitigation (SINAPRED). Similarly, the municipal authorities collaborate with the Ministry of Health in the maintenance of more than 180 maternity shelters. These shelters which accommodate and support rural women in the last weeks of their pregnancy and have been instrumental in achieving the dramatic reduction in the incidence of maternal mortality from more than 90 deaths per 100,000 births in 2006, to 31 in 2021.

Together with the National Institute of Technology (INATEC), the municipalities strengthen vocational training through their local vocational skills training programs. Endorsed by INATEC, these programs certify thousands of young and not-so-young people every year in new trades and skills. Local governments also coordinate closely in their respective municipalities with the Ministry of Transport and Infrastructure. Every year they build new road and bridge infrastructure and carry out maintenance of existing infrastructure. With the Ministry of Family, Community, Cooperative and Associative Economy and the Nicaraguan Institute of Tourism, the municipalities promote the popular and creative economy.

They provide support to micro and small businesses, promote local fairs selling local products and developing the activities and initiatives of the Creative Cities Network. With the Nicaraguan Institute of Culture, the local municipal authorities have created more than 130 municipal choirs and an equal number of dance schools. The municipal authorities play a vital role, together with the Nicaraguan Sports Institute, in the development of the infrastructure and organization of recreational and sports activities across the whole country.

In all these areas of activity and various others, such as education, health or access to housing for low-income families, the municipal authorities work closely with the respective central government and State bodies to promote municipal development. So, in the context of the last 15 years of Sandinista government and given the centrality of municipal interventions for the current National Plan to Combat Poverty and for Human Development, it is very difficult, practically impossible, to distinguish between the national relevance of these municipal elections and their local importance.

In the national sense, winning the 153 municipalities nationwide reflects a tremendous, unquestionable affirmation of the People as President’s faith in the government of President Daniel Ortega, in Vice President Rosario Murillo, in their ministerial team and in the great institutional advances the country has made, especially in this context in relation to the Supreme Electoral Council. In the sense of the People as protagonists of their municipal authorities, these elections confirm popular satisfaction with the performance of the Sandinista municipal authorities and people’s confidence in the ability of their newly elected local governments to ensure the integral development of their municipality and so help guarantee the Christian, Socialist, Solidarity-based common good of all Nicaragua’s People. Following these municipal elections, the Sandinista Popular Revolution in Nicaragua is moving more united than ever towards yet more impressive advances and victories.

This article was originally published on Tortilla con Sal, translated from Spanish.

Stephen Sefton, renowned author and political analyst based in northern Nicaragua, is actively involved in community development work focussing on education and health care. He is a Research Associate of the Centre for Research on Globalization (CRG).