Millions Demonstrate in Support of Ethiopia Against Western Interference

Throughout the Horn of Africa state of Ethiopia millions of people joined government-endorsed demonstrations on October 22 calling for national unity and an end to the United States coordinated destabilization efforts.

These events took place just two days prior to the scheduled peace talks between the central government led by Prime Minister Ahmed Abiy and the Tigray People’s Liberation Front (TPLF), a rebel organization which has been fighting the administration based in the capital of Addis Ababa.

During the nationwide mobilizations on October 22, the marchers could be heard saying “Respect our sovereignty,” “TPLF is a mercenary group,” “TPLF is the cause!,” “End proxy war on Ethiopia,” “People in Tigray are our compatriots ; Junta [TPLF] is our enemy,” and “TPLF should not be given a chance to prepare for the fourth round of attack” are some of the words which echoed among the people while marching to Meskel Square in Addis Ababa.

Ethiopia is the headquarters of the 55-member African Union (AU) whose predecessor, the Organization of African Unity (OAU), hosted the founding summit nearly six decades ago in 1963. The same issues of national independence, sovereignty and continental unity remain on the top of the agenda for the 1.4 billion residents of the continent and its mass organizations, political parties and governments.

Since November 4, 2020, the TPLF has waged a war of regime-change against the now Prosperity Party and its allies within the central government. Ethiopia at the time of the attacks by the TPLF rebels, was poised to make fully operational the Grand Renaissance Dam Project GERD), the largest of such hydro-electric projects among all AU member-states.

On October 22, Ethiopians made a profound statement that they were firmly against the foreign policy of Washington aimed at fragmenting and removing its elected government. Prime Minister Abiy, a Nobel Peace Prize winner, is committed to achieving the national unity of Ethiopia along with its program of ending instability and terrorism in the entire Horn of Africa region.

Abiy came into office in April 2018 after a national uprising against the previous government in Ethiopia which was under the political domination of the TPLF. The TPLF-led Ethiopian People’s Revolutionary Democratic Front (EPRDF) constituted the administration in the country between May 1991 until the early months of 2018. After taking office, Abiy has normalized relations with neighboring Eritrea which had been at war with the TPLF-EPRDF regime since 1998.

Eritrea, a former Italian colony, had waged a war of independence against Ethiopia since 1961, is now closely allied with the Abiy government. As a result of the collapse of the Workers Party of Ethiopia (WPE) administration under Col. Mengistu Haile Mariam, Eritrea declared independence which was recognized by the Organization of African Unity and the United Nations in 1993 after a national referendum. Reports indicate that the military forces of Ethiopia and Eritrea are working in alliance to counter the U.S.-supported TPLF rebels. 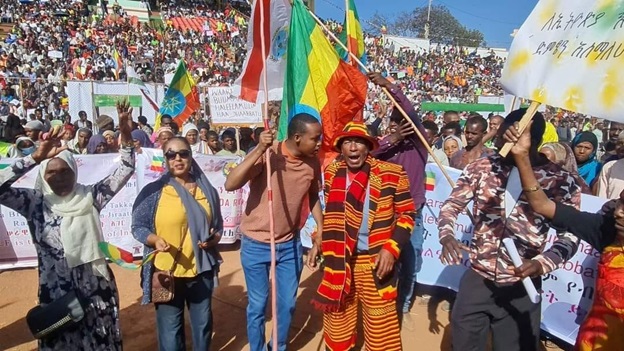 Since the initial military attacks in Mekelle, the capital of Tigray Province, in early November 2020, the Ethiopian National Defense Forces (ENDF) has been able to halt the advances of the TPLF. There have been several ceasefires between the Federal government and the rebels since 2021. However, on every occasion, the Abiy administration says that the TPLF has broken each agreement while refusing to negotiate for the conclusion of the conflict in good faith.

The attitude of the United States government under former President Donald Trump and the current administration of President Joe Biden has remained unchanged. Trump and Biden have continued Washington’s hostility towards Ethiopia. High-level officials within the U.S. have repeatedly threatened the Ethiopian government and people to the point of engaging in public histrionics at the United Nations and within the corporate as well as western media outlets.

In an October 23 article published by Borkena.com, it notes that:

“Renewed pressure against Ethiopia in connection with the war against the TPLF rebel groups is on the rise as the TPLF forces are losing ground militarily. The Ethiopian government confirmed earlier this week that the Defense Forces controlled three key towns (Shire, Alamata and Korem) in the Tigray region of Ethiopia. Local sources also indicate that the Ethiopian government has already started distributing food aid in the areas recaptured recently. Work to restore power to the aforementioned towns is also underway.”

Negotiations Are Being Held at the Aegis of the AU

The talks which were slated to begin on October 24 are an important challenge in the AU attempts to stabilize the situation in the Horn of Africa. The internal conflicts fueled by imperialist interference coupled with the impact of climate change where disruptions of rainfall, flooding and food deficits have further aggravated the overall social crisis in the region.

One prior attempt earlier in October to convene peace negotiations related to the Ethiopian situation was postponed due to what was said to have been logistical issues. Media reports on October 24 say that the TPLF’s delegation had arrived in South Africa.

Undoubtedly, the Biden administration will be monitoring the talks. Ethiopians in Africa and the U.S. have held mass demonstrations against a proposed bill that would impose sanctions on the government in Addis Ababa. The legislation as of now has been placed on hold. Nonetheless, it is a clear indication of the ongoing neo-colonial foreign policy directed towards Ethiopia and the entire African continent.

As in Ethiopia, the U.S. has continued to engage in military interventions in neighboring Somalia where the Biden administration upon taking office deployed hundreds of Pentagon troops to the country. The U.S. AFRICOM which has a major base in Djibouti, also in the Horn of Africa, at Camp Lemonnier, represents the commitment of Washington to maintain a military and intelligence presence in the Horn of Africa.

The region along with other areas of East Africa has been the source of recent findings of strategic minerals and energy resources. All along the coasts of East Africa there have been enormous discoveries of oil and natural gas.

In Mozambique, the northern Cabo Delgado province has been targeted by insurgents disrupting a massive Liquified Natural Gas (LNG) production project. Military forces from Rwanda and the Southern African Development Community (SADC) have intervened in the struggle to defeat the rebel forces.

Any assessment of these internal conflicts in the Horn of Africa cannot be separated from the foreign policy imperatives of the U.S. and their allies in the European Union (EU). Since the late 19th century imperialist states have sought to colonize the territories which today are known as Ethiopia, Somalia, Eritrea, Djibouti, Kenya and Sudan.

Kenya, Somalia, Djibouti, Eritrea, Kenya and Sudan were formally colonized by imperialist governments based in Europe. Ethiopia under the monarchical leadership of Menelik II, defeated the Italian imperialists culminating in the victory at the Battle of Adwa in early March 1896. In 1935, the colonial fascist regime of Benito Mussolini invaded once again the Ethiopian kingdom then under the leadership of His Imperial Majesty (HIM) Haile Selassie I. Although being forced to leave the country amid the Italian onslaught after 1935, Selassie and the Ethiopian people were able to mobilize international assistance from Allied governments and the anti-colonial movements leading to the defeat of Mussolini and the return of Selassie to the country by 1941.

In 1974, the masses rose up against the monarchy leading to a socialist-oriented revolution which attracted the support of the former Soviet Union, the Republic of Cuba and other anti-imperialist forces internationally. Monumental land reforms programs were implemented along with material assistance to the national liberation movements in Southern Africa still fighting for national independence.

The ascendancy of the EPRDF-TPLF administration in May 1991 was done under the tutelage of the U.S. administration of then President George W.H. Bush, Sr. In subsequent years during the 1990s through the uprising of 2018, the former government under the TPLF served as a conduit for the implementation of Washington and Wall Street’s foreign policies throughout East Africa.

It has been reported that the former U.S. Assistant Secretary of State for African Affairs under Bush, Sr., continues to serve as a consultant and promoter of the TPLF. This unwarranted interference into the internal affairs of Ethiopia is unacceptable.

The outcome of the talks must guarantee the territorial sovereignty and social stability of Ethiopia. A sustainable peace agreement in Ethiopia would have positive implications for developments in neighboring Somalia and Sudan.