Is the US Responsible for the Attack on Makiivka in Donetsk?

Kurt Nimmo, Global Research, January 5, 2023 — Plenty of evidence the USG and its proxies are on the ground, killing Russians in Ukraine.As probably should be expected, The New York Times, CNN, The Washington Post, Fox News, et al, ad nauseam, are dwelling on the anger of Russians following the deadly attack on a Russian base in Makiivka, an industrial city in Donetsk Oblast, now part of the Russian Federation.

For the USG and its war propaganda media, the outpouring of anger and frustration over the attack is a positive development for Ukronazis. It is hoped outrage will turn against Putin and the Russian leadership.

As usual, the BBC and those who buy into its nonstop propaganda are misjudging the Russian people. Indeed, they are “beginning to wake up,” not in response to missteps by Putin and his generals, although there is justifiable anger, but rather that Ukraine is in large part controlled by psychopaths who consider them cockroaches and want nothing more than to kill them.

Of course, we can’t expect the BBC, the main propaganda outlet for a nation responsible for blowing up the NordStream pipeline, thus leaving Germans to freeze this winter, to report details on the attack. For warmonger propagandists, the death of hundreds of Russian soldiers, without much detail on the attacks, is enough info for blinkered Brits.

First and foremost, we were told by script-reader Biden and the USG that they would only provide Ukraine with governed Lockheed Martin HIMARS artillery, unable to reach Russia. However, according to the death merchant manufacturer, “the launcher can fire rounds reaching beyond 300km and is ‘interoperable with the latest precision munitions that range 15 to 499+ km,’” reports Newsweek.

Depending on where the HIMARS were fired, most of Donetsk is within reach of potentially illegal rounds, illegal because the platform was used to fire cluster bombs, outlawed by all sane and rational nations. Believe it or not, Biden is actually considering sending cluster bombs to genocidal Ukronazis.

The original M26 rockets had cluster warheads which distributed over 600 small bomblets over a wide area. Nicknamed ‘steel rain,’ these proved extremely effective during Operation Desert Storm in 1991, but left an unacceptable number of unexploded bomblets on the battlefield. The M26 was replaced with a unitary warhead, that is, one with a single, large explosive charge.

News reports dutifully ignored by the war propaganda media indicate the Ukronazis have in fact already used cluster munitions, more than likely provided by the USG, which lies about the degree of military assistance given to Zelenskyy and his band of whack-job ultranats. Remarkably, the use of cluster bombs in Ukraine, often responsible for killing and maiming children, was reported by The New York Times. According to a report on MRonline:

The cluster bombs that the Ukrainian forces used against a village populated with civilians on their own territory are banned by countries around the world for their capacity to haphazardly kill innocent civilians, according to the Convention on Cluster Munitions. Almost 20% of these munitions fail to detonate on impact, and remain a threat to civilians long after hostilities end, killing and maiming them indiscriminately.

The Ukronazis, notorious for disemboweling and hacking to death Polish children in Volhynia and Eastern Galicia during WWII, began using cluster bombs in Donetsk following the USG-orchestrated coup in Kyiv.

Ukrainian forces had also used cluster bombs in 2015 in battles against the breakaway republics of Lugansk and Donetsk to the country’s east. More recently, they fired such munitions on Donetsk on March 14, killing 20 people and wounding 37 others…

The head of the [Donetsk’s] Defense Ministry’s National Defense Management Center, General Mikhail Mezentsev, touched on Ukraine’s actions in Donetsk, revealing the toll of the Ukrainian Tochka-U attack, a missile containing cluster munition. He described the bombing as a “war crime.”

If in fact HIMARS artillery was used in the attack on the Russian base in Makiivka, it is more than likely USG trainers and Pentagon technicians were present. The Russians understand “that targets are selected using US military satellites,” and training of Ukronazis on the complex precision rocket system is intense. 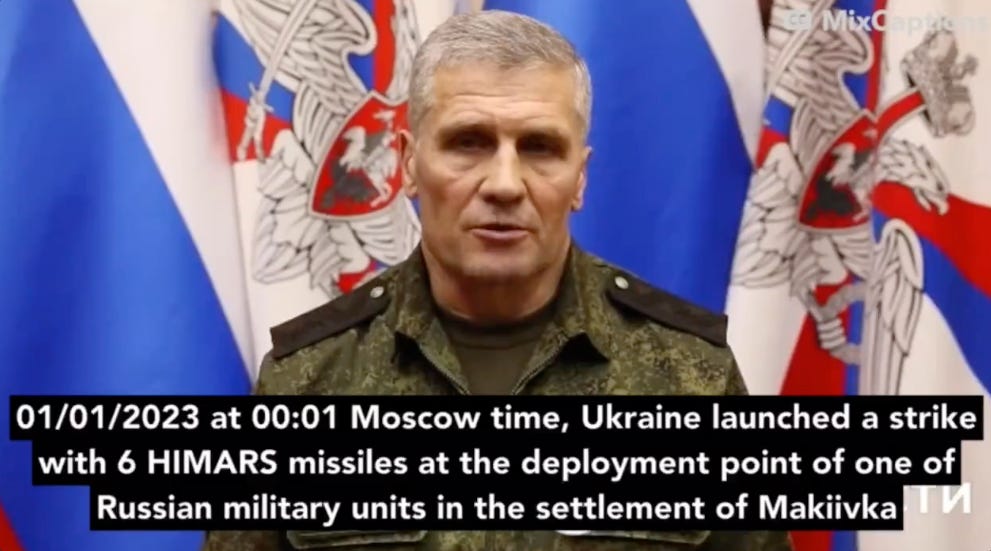 “Ukrainian Soldiers have begun training on the first U.S.-made rocket artillery systems at an undisclosed location outside of the country, according to a senior U.S. defense official,” the Defense Blog noted in June.

It is entirely possible a “shoot-and-scoot” HIMARS unit could have positioned itself close enough to level a Russian military facility in Donetsk. However, I doubt the mission was carried out by Ukrainians, as we know the Pentagon and NATO do not entirely trust them—and with good reason. USG weapons systems are showing up in Africa, sold to potential terrorists and other “bad actors” by unscrupulous Ukrainians.

“NATO does not trust Ukrainian soldiers to operate HIMARS themselves, presumably for a number of reasons,” explains Ian Summer, “An American Tourist in Russia,”

Ukrainian crews might not be competent enough to perform these high-speed “shoot and scoot” missions without being detected and destroyed by Russian counter-battery fire, Ukrainian neo-nazis might be too tempted to [attack] Russian territory, Ukrainian commanders might be too corrupt and sell HIMARS launchers and munitions, or all the above.

I admit this is speculation (a conspiracy theory rendering me, according to the FBI, a domestic terrorist, maybe even a white supremacist). However, a number of reported facts strengthen the argument that the USG is on the ground in Ukraine, employing its sophisticated GPS and satellite imagery to target Russians. In short, the USG is killing Russians—and many of them (some estimates say the Makiivka bombing killed over 600, although this has yet to be confirmed).

1. The CIA is in Ukraine, and has been for some time. This was reported by The New York Times, but only because the state has made it part of the pro-war narrative. The CIA is not in the business of passing out cookies like Victoria Nuland.

2. In early December, the Pentagon admitted its willingness to push the envelope in Ukraine. “An anonymous US defense source told The Times that ‘the fear of escalation has changed since the beginning. It’s different now.’”

3. While it would be counterproductive for the USG to admit it has troops on the ground, it is far less controversial to admit there are a lot of American mercenaries willing to do what the Pentagon can’t, or won’t do in Ukraine, at least for the moment.

4. As with the wars in Iraq and Afghanistan, the USG is using corporate mercenaries, according to the Russians, in particular, hired guns from Greystone, a former affiliate of Blackwater (subsequently Xe, then Academi). The Russians claimed in April there were 150 American mercenaries operating in Ukraine.

5. Even before Russia’s SMO, the USG decided to send “advisers” to Ukraine. “The Biden administration is considering sending military advisers and new weapons to Ukraine in the face of a Russian military buildup near the border between the two countries,” The Hill reported on November 23, 2021, citing CNN. Consider, as a historical parallel, what occurred after President Kennedy sent military advisers to Vietnam in 1961.

6. The CIA again. On December 26, I wrote “CIA’s Deadly ‘Strategy of Tension’ to Destroy Russia,” a look at mysterious attacks deep inside Russia. I pointed out how the CIA recruited a “stay behind army” of extremists to engage in various terrorist attacks and acts of sabotage following WWII. I wrote the post after former US Army Special Operations operative Jack Murphy claimed,

“NATO and US intelligence agencies have been running agents inside Russia, directing them to target critical infrastructure in a bid to create “chaos.” Shopping centres, gas pipelines and fuel depots have all suffered damage across Russia in recent months with Mr Murphy pointing to a CIA-directed campaign of covert “sabotage.”

Again, considering the past history of the national security state and its CIA enforcer, I find it difficult to believe the CIA and the Pentagon (along with British intelligence) are not responsible for attacking far-flung cities in Russia and also coordinating, if not accomplishing on its own, attacks on the Russians in Donetsk.

This article was originally published on the author’s blog site, Kurt Nimmo on Geopolitics.

Kurt Nimmo is a regular contributor to Global Research.