In The Multipolar World Iran Will No Longer Fear U.S. Sanctions

Moon of Alabama, June 19, 2022 — When U.S. president Joe Biden recently held a number of talks in the Middle East Iran was one point on his agenda. The U.S. has made it clear that it does not want to reenter into the nuclear deal with Iran. It is instead again attempting a ‘maximum pressure’ strategy to pressure Iran into additional concessions.

Iran has made it clear that there will not be any more then those it had made in the original agreement. Biden then tried to form an anti-Iran coalition out of Israel and the Gulf regimes. The Gulf Cooperation Council states rejected that:

[T]he Saudi foreign minister poured cold water over any imminent normalization with Israel, saying this was not a precursor to further steps. He said Riyadh was not part of any discussions on a Gulf-Israeli defense alliance to counter Iran.

All GCC are talking with Iran to normalize their relations.

Iran will benefit from the new multi-polar world. It has been seeking to ally itself with the Russia and China block with added relations to a neutral India. Last year Iran became a full member of the Shanghai Cooperation Organization. This year it applied for membership in BRICS.

Amir-Abdollahian also called on Indian Prime Minister Narendra Modi, a privilege not accorded to all visiting foreign ministers. Tweeting on the meeting, Modi highlighted how “relations have mutually benefitted both the countries and have promoted regional security and prosperity.”The official statement released by the Ministry of External Affairs highlighted the exchange of views on important issues like the Iran nuclear deal, the Ukraine conflict, and the situation in Afghanistan. India “appreciated the role of Iran in facilitating India’s medical assistance to Afghanistan, including supply of COVID-19 vaccines to Afghan nationals residing in Iran.” In addition, all bilateral issues including cooperation in the field of regional connectivity and the progress made at the Chabahar port were reviewed. Exuding confidence at the outcome of the visit, the Iranian foreign minister said that “preparing a roadmap for strategic cooperation between Iran and India can regulate long-term relations and protect it from the impact of destructive factors.”

A few moth ago Iran signed a new transport agreement with its northern neighbor Azerbaijan. It will be good for both sides:

On 11 March, Azerbaijan and Iran signed a memorandum of understanding (MoU) on establishing railway, highway, communication, and energy supply lines connecting Azerbaijan’s East Zangezur economic region and the Nakhchivan Autonomous Republic through the territory of Iran. According to the document, there is a plan to build four bridges over the Araz River and two railways and develop communication and energy supply infrastructure to establish a new corridor.

The better relations with Azerbaijan will also open a rail corridor towards Russia.

Another new trade route was finally opened to connect India via Iran with Russia. 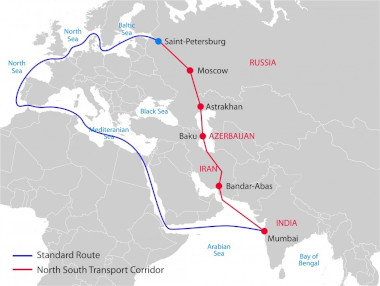 bigger
This project has been on and off for many years but this month it was finally activated:

An India-bound cargo sent from Russia using the International North-South Transport Corridor (INSTC) reached the Sarkhas railway station in Iran on July 13. From the railway station, the cargo will go to Bandar Abbas port in southern India and then come to India via the Arabian Sea.The cargo left Chekhov station in Russia on July 6 and it was received by a team of Iranian ministers

INSTC is a 7,200 km-long transportation network offering the shortest connectivity route to its member states. It was established on September 12, 2000, by Iran, Russia and India. The corridor encompasses sea, road and rail routes.

In future the route will go from India to Chabahar, a port in south east Iran that India had helped to build. From there the goods will go by rail up north to the Caspian Sea and then by ship directly to Russia. This will shorten the route even more and will also end any dependency on other partners.

But the greatest news for Iran is a new deal with Russia’s Gazprom that was signed today:

The National Iranian Oil Company (NIOC) and Russian gas producer Gazprom signed on Tuesday a memorandum of understanding worth around $40 billion, Iran’s oil ministry’s news agency SHANA reported.The deal was signed during an online ceremony by the CEOs of both companies on the day Russian President Vladimir Putin arrived in Tehran for a summit with his Iranian and Turkish counterparts.

Gazprom will help NIOC in the development of the Kish and North Pars gas fields and also six oil fields, according to SHANA. Gazprom will also be involved in the completion of liquefied natural gas (LNG) projects and construction of gas export pipelines.

Iran sits on the world’s second-largest gas reserves after Russia, but US sanctions have hindered access to technology and slowed development of gas exports.

Gazprom is a strong partner and can not be hindered by U.S. sanctions. Iran will finally be able export more of its plentiful gas. Russia will also have a chance to work with Iran to keep the prices at a certain level. With such a large deal will also come protection. Iran will be able to call on Russia should someone start hostilities against it.

When Iran produces enough gas it can also revive the old project of a pipeline to India. This could either go through Pakistan or, as India would probably prefer, through an undersea pipeline:

A 1,300-km undersea pipeline from Iran, avoiding Pakistani waters, can bring natural gas from the Persian Gulf to India at rates less than the price of Liquefied Natural Gas available in the spot market, proponents of the pipeline said on Tuesday.Releasing a study on the Iran-India gas pipeline, former oil secretary T.N.R. Rao said natural gas imported through the over $4 billion line would cost $5-5.50 per million British thermal unit at the Indian coast, cheaper than the rate at which some of the domestic fields supply gas.

Despite U.S. sanctions Iran is again becoming fully integrated into its region. It is a great success and the gas and transit deals will help its economy to make some gains even as the U.S. adds new sanctions. Russia, India and China are partners who can and will ignore those.

Iran now also has the capability to produce sufficient nuclear material for a number of bombs. It will not use this capability as its religious ideology prohibits the making and use of such weapons. But it is a latent threat that can be used to deter Israel and the U.S. from any attack.

That Trump left the nuclear deal was dumb. That Biden did not revive it immediately after taking office was even dumber. To now stay out of it, only to keep some stupid sanctions against Iran’s Revolutionary Guard Corp, is the dumbest step I can think of.

Washington has yet to understand that it has lost its mono-polar position that made the international sanctions which led to the nuclear deal with Iran possible. In the multi-polar world that exists now Iran can develop as it likes. Others will now ignore U.S. or EU sanctions and the threat of them is no longer useful. More countries under U.S. isolation, Venezuela, North Korea, Cuba and Syria, will also find new ways and alliances to better their positions.

In his book The Great Chessboard the former National Security Advisor of the United States Zbigniew Brzeziński wrote:

Potentially, the most dangerous scenario [for America] would be a grand coalition of China, Russia, and perhaps Iran, an ‘anti-hegemonic’ coalition united not by ideology but by complementary grievances.

Joe Biden has finally managed to create that.