Chen Qingqing and Zhang Hui, Global Times, October 21, 2022 — The world is closely watching events in the UK following the dramatic resignation of Prime Minister Liz Truss, who became the shortest-serving prime minister in the country, which not only rocked the British political scene but also raised concerns among UK’s major allies. The succession race now begins with nominations for the next PM closing on Monday and candidates requiring a minimum of 100 nominations to proceed to the ballot. Some observers called the resignation a joke and the head-spinning political changes in the UK seriously damaged the reputation of the country on the global stage.

Truss’ downfall also reflects the overall dilemma in Western governance, especially after it opened the Pandora’s box of exacerbated social divisions and extremism, leaving political parties to quarrel over trivial issues, some experts said. The lack of consensus affects overall governance, and some experts said that Britain is now caught up in a new round of an even more complex “British disease.”

Rishi Sunak, the former finance minister, has emerged as the early favorite to become Britain’s next prime minister, after Truss terminated her premiership marked by economic and political turmoil, the Financial Times reported. To enter the contest, a candidate needs the votes of 100 MPs by Monday, and former prime minister Boris Johnson has been called on by some Tory MPs to return to office, according to the media report.

Some Western media outlets such as AP pointed out that even though Truss has quit, the UK’s political and economic turmoil persists, while world leaders reacted to her resignation in different ways. US President Joe Biden called Truss “a great partner” on the Russia-Ukraine conflict, reaffirming that “the US and the UK are strong allies and enduring friends – and that fact will never change,” according to media reports. European leaders including French President Emmanuel Macron and Irish Prime Minister Micheal Martin voiced hope that the next British leader would bring stability to the country, as the Ukraine crisis amid an increasingly turbulent geopolitical situation makes the UK’s political stability more urgent than ever, media reports said.

In response to Truss’ resignation, Wang Wenbin, spokesperson of the Chinese Foreign Ministry, declined to comment as it was the UK’s domestic issue. “China’s stance toward China-UK relations is clear and consistent,” he said, expressing the hope to work with the UK to push China-UK relations along the right track on the basis of mutual respect and mutual benefit.

“Truss’ resignation and the political leadership crisis the UK is facing now shows instability in British politics domestically, and will also damage its credibility and reputation abroad,” Tom Fowdy, a British political and international relations analyst, told the Global Times on Friday.

Truss’ resignation is the product of a domestic policy premised on identity and ideology, as opposed to reason, empiricism and pragmatism. Truss’ rise is a product of how British politics has become increasingly right-wing and divided since Brexit, Fowdy said. “It is also a product of instability and divisions in the Conservative party itself, which is why governments are unstable and they keep deposing leaders. Whoever comes next will be the fourth prime minister since 2019.” 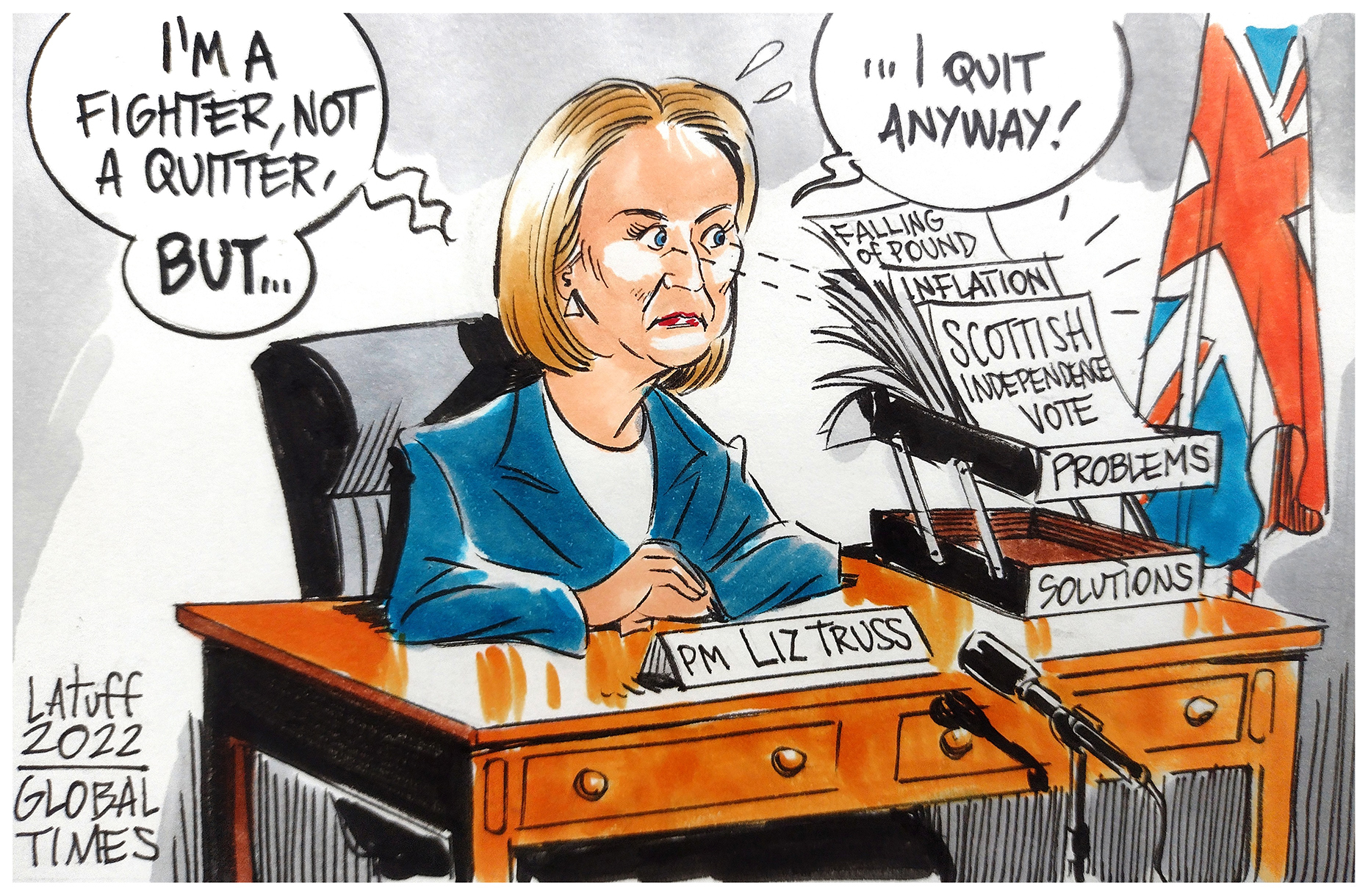 Instability in domestic politics will have a spillover effect on diplomacy, especially when the US needs the UK more than ever in handling the Ukraine crisis, given that the latter’s position is vastly different from the EU bloc’s. Yang Xiyu, a senior research fellow at the China Institute of International Studies, told the Global Times on Friday that the UK is the US’ single most reliable ally for its bloc confrontation operation in which the Russia-Ukraine conflict is strategically instigated, while the UK’s wholehearted support for the US is profoundly different from other European countries’.

“Thus, Biden is desperately hoping that the next prime minister will follow Truss, but for other European countries, their priority is to ensure that instability in the UK will not affect their countries,” he said.

Truss’ resignation appeared to be a result of domestic economic distress, but it is also associated with the question of whether to continue bailing out Ukraine at a time of economic crisis, an issue facing all Western countries that have been offering financial help and weapons to Ukraine, Yang said. “Truss’ resignation generated great shock in the West, which will inevitably affect the global landscape.”

Some experts also believed that the next UK government will continue to closely follow the US in its political stance, but its actions will be far from enough to back up its verbal promises, as it has to spend its limited resources at home first.

Truss’ rapid downfall is also a warning sign for other countries like the US, as her aggressive tax-cutting plans roiled bond markets and sent shockwaves through the British markets. “Whoever succeeds Truss, higher taxes and a return to austerity look more likely. Neither are good for consumer confidence or spending,” the Washington Post said on Friday. 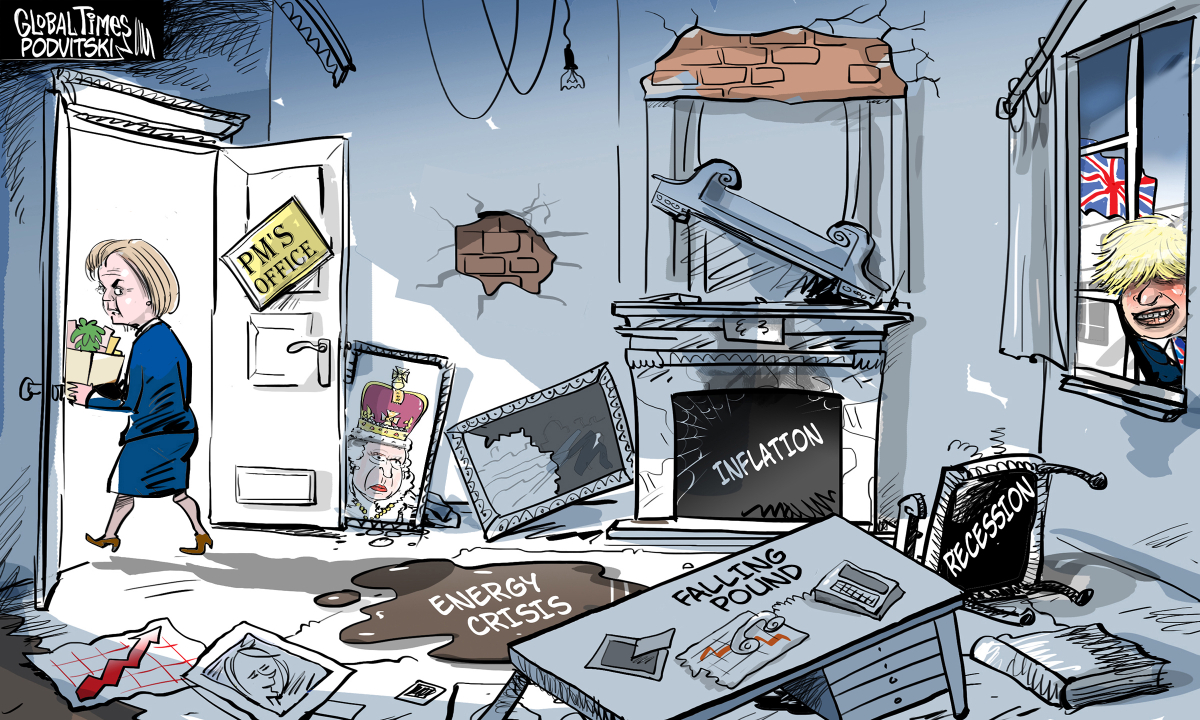 Rishi Sunak, who was runner-up to Truss in the Tory leadership race to replace Boris Johnson, is now favorite with bookmakers to replace her, Sky News said in a report. Sunak won every voting round among MPs in that race, but there are questions over whether he would be able to reunite the party, having been seen to have played a key role in Johnson’s exit as PM, according to the report.

Penny Mordaunt, who also stood for the Tory leadership in the summer, is seen as Sunak’s most dangerous challenger. Suella Braverman, who was forced to quit as home secretary on Wednesday, might also stand, FT said.

Reuters reported on Friday that former PM Johnson and Sunak were leading the potential contenders to replace Truss on Friday, with candidates canvassing support to become Conservative Party leader in a fast-tracked contest.

“It’s not impossible, as he has always had more backing than Truss within the party,” Fowdy said in commenting on the possibility of Johnson’s return to Downing Street. However, for him to return would be absolutely disastrous and would constitute an enormous blow to the credibility of British politics, he noted.

In the eyes of some Chinese experts, Truss’ dramatic resignation could also be seen as a microcosm of the decline in Western politics, as only replacing leaders without changing the mindset will not solve any problem.

The UK has entered a stage of “British disease 2.0,” with all the contradictions and challenges facing the next UK government much bigger than the structural contradictions that former prime minister Margaret Thatcher faced, noted Yang, the expert on foreign affairs.

“Governance in the UK is about to enter a stage without clear direction and effective measures, and it is unlikely to improve any time soon. It might take more than 10 years,” he said.