Famine in Africa: Millions on the Verge of Starvation? What are the Causes?

There has been a deteriorating situation within various African states related to the impact of drought and the consequent lack of food for hundreds of millions of people.

These events on the continent cannot be analyzed separately from the broader international economic and security crises which has impacted the ability of the existing global markets to provide adequate food to the peoples of the world.

The acute shortages of food in various regions across Africa have not yet reached the officially designated category of a famine. However, if food assistance is not provided soon, estimates from the World Food Program (WFP) and the Food and Agricultural Organization (FAO) suggest that tens of millions of people will be on the verge of starvation.

WFP officials indicate that their efforts to address the current crisis, particularly in East Africa, would require an additional $192 million to provide the necessary food to prevent hunger. In comparison to what is being provided to the war in Ukraine along with the massive tax breaks and subsidies to multinational corporations, $192 million pales in comparison.

Any worsening of the food crisis in Africa could easily create further destabilization and displacement extending far beyond the continent. Since the Pentagon-NATO war against Libya during 2011, the consequent social disruptions continue up until today.

In Ethiopia, the previous administration of President Donald Trump sought to undermine the sovereignty of the Horn of Africa state by fueling tensions with Egypt which is stalling the full operational capacity of the Grand Ethiopian Renaissance Dam (GERD), the largest power generation facility in the region. The rebel Tigray People’s Liberation Front (TPLF) initiated a war against the central Ethiopian government in Addis Ababa at the aegis of Washington and its allies in Cairo and Khartoum in November 2020. Although the TPLF has been driven back into its provincial stronghold in the north of the country, the subsequent humanitarian crisis has been politicized by Washington and the EU member-states.

Somalia has been subject to direct Pentagon, Central Intelligence Agency (CIA) and State Department interference for many years. Despite the presence of the African Union Mission to Somalia (AMISOM), which is heavily trained and funded by Washington and the EU, the Biden administration announced earlier in the year that it would redeploy 700 U.S. troops to Somalia.

Nonetheless, Somalia is once again a focal point of food deficits which border on the brink of famine. All of the deliberate involvement by the western capitalist states has not been able to bring peace and stability to the country. 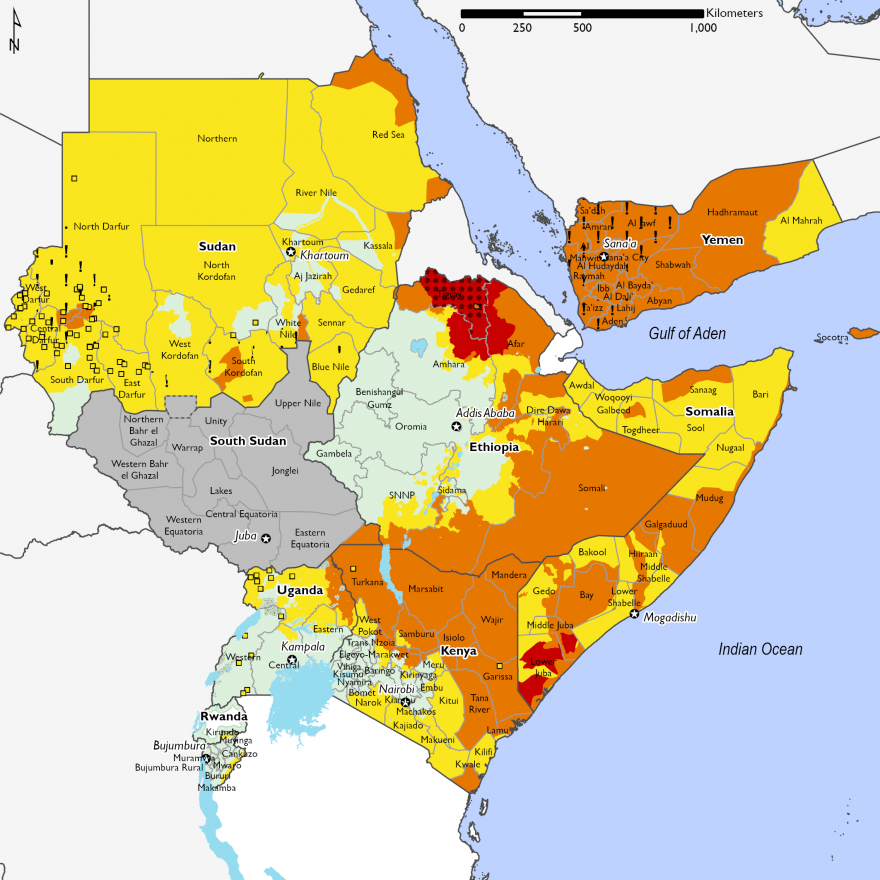 Because of the War in Ukraine, We Are Heading for a Global Food Catastrophe

South Sudan is the newest recognized state by the United Nations and the AU. Since its independence in 2011, there have been several internal conflicts between the contending political forces inside the country. The U.S., Britain and the State of Israel all backed the partitioning of the Republic of Sudan. Consequently, these entities must accept their substantial responsibility for the turmoil now in existence in South Sudan.

Surprisingly enough, the Biden administration has suspended aid to South Sudan. The government in the capital of Juba has made a direct appeal to Washington to resume aid shipments into the country. See this.

Since the advent of the COVID-19 pandemic the overall global economic systems have been severely disrupted. Even in the Western European and North American industrial states, there has been a precipitous hike in food, energy, transportation and housing costs. The leading capitalist governments including the United States have failed to institute measures which could sustain the working class and oppressed living in these countries.

For example, the administration of President Joe Biden has not threatened to impose price controls on essential commodities and services in order to provide assistance to the impoverished masses. Social programs such as school breakfasts and lunches are being terminated due to lack of funding. At the same time, at least $55 billion in military and other aid is being sent to Ukraine in order to prolong a proxy war against the Russian Federation. These military and capitalist economic priorities are hampering the ability of people across the world to meet their food and energy needs.

East Africa Has Become the Epicenter of the Threat of Famine

In the East African nations of Ethiopia, Somalia and South Sudan, a convergence of drought, supply chain problems which began at the height of the COVID-19 pandemic, internal conflict and the unprecedented sanctions against the Russian Federation by the European Union (EU) and the U.S., is imperiling greater numbers of people on a weekly basis. The response of the President Joe Biden White House has been delayed and inadequate while the lack of food and medical attention is reaching critical levels. (See this)

While announcing additional funding for humanitarian relief by the U.S. Agency for International Development (USAID), the Biden administration has cloaked its stated commitments by blaming Russia for the food crisis in developing countries. Yet the U.S. has engineered the Ukraine crisis through a series of foreign policy maneuvers dating back to 2014 when the-then government of President Viktor Yanukovych was overthrown by the administration of President Barack Obama. Moreover, pressure has continued on the Ukrainian government to not negotiate a ceasefire with Moscow. (See this)

In a press release from USAID, it claims:

“Today the United States, through the U.S. Agency for International Development (USAID), announced nearly $55 million in additional food-security assistance to Ethiopia. Ethiopia is currently experiencing increased food insecurity due to higher food and fertilizer prices, which have been exacerbated by Russia’s invasion of Ukraine. USAID will utilize this new funding to help Ethiopians overcome the current food crisis and to build further resilience to prevent and respond to food-related shocks in the future.”

However, to what extent is this aid being pledged to Ethiopia will indeed go towards stabilizing the country as opposed to providing support and coordination to the TPLF and other rebel groupings seeking to overthrow the administration of Prime Minister Abiy Ahmed? Just several months earlier, a Congressional bill was withdrawn that called for the imposition of harsh sanctions against Ethiopia. At present, Addis Ababa has been suspended from participation in the Africa Growth and Opportunities (AGOA) program as a direct result of the foreign policy of the Biden administration. (See this)

With specific reference to Ethiopia, the United Nations Children’s Fund (UNICEF) said on July 19 that:

“Four consecutive failed rainy seasons have brought on severe drought in Ethiopia’s lowland regions of Afar, Oromia, the Southern Nations, Nationalities, and Peoples’ (SNNPR) and Somali regions. Water wells have dried up and millions of livestock have died, resulting in mass displacement…. ‘This climate-induced crisis is a malnutrition crisis for children and not just in Ethiopia but across Africa,’ said [Manuel] Fontaine (UNICEF Director for Emergency Operations).

‘While UNICEF and partners are already on the ground providing lifesaving nutritional support for severely malnourished children, USAID’s recent $200 million contribution to UNICEF globally is a timely game changer and we are very grateful. This funding will significantly scale up our nutrition response across the world. ’The ripple effect of the war in Ukraine is also set to tip more families in Africa over the edge and will exacerbate food insecurity with increasing fuel prices and reduced availability of wheat imports. Ethiopia imports 67 per cent of its wheat from Russia and Ukraine.’”

Ethiopia along with other African states conduct extensive trade with Russia in the agricultural sectors. The sanctions imposed by Washington are undoubtedly exacerbating the economic uncertainty and food crisis. Obviously, the AU member-states are not in favor of the proxy war waged by Washington and Wall Street against Russia. The reconvening of the Russia-Africa Summit in November and December of this year is a strong indication that the continent is seeking ways to avoid the devastating impact of U.S. militarist policies in Eastern Europe.

The only medium and long-term solutions to the problems of climate change, drought, food deficits and famine is a dramatic shift in the international relations of production and distribution of wealth around the globe. An expanding majority of the working and oppressed peoples are demanding the redistribution of the world’s resources and wealth which can only result in the further weakening of imperialism.