China resolutely responds to US’ continuous provocations on Taiwan question

August 16, 2022 Leave a comment
Global Times, August 15, 2022 — As the US continued its provocation to China by sending a delegation of five lawmakers to China’s Taiwan region, the Chinese People’s Liberation Army (PLA) Eastern Theater Command organized multi-unit joint combat readiness patrols and real-combat drills in the sea areas and airspace around the Taiwan island on Monday, serving as a firm response and solemn deterrent to the provocation and collusion between the US and the Taiwan island.

Some Chinese experts warned that it’s highly dangerous that the US government is playing with fire in challenging China on its core interests, and more lawmakers not only from the US but also from other Western countries may follow suit. It’s necessary to impose sanctions on those who have trampled on the one-China principle, and at the same time, the PLA’s military exercises and training activities surrounding the island are expected to become routine until reunification, some experts said.

The reportedly two-day visit of US lawmakers, led by Ed Markey, member of Senate Foreign Relations Committee, came just 12 days after US House Speaker Nancy Pelosi visited the island – a highly provocative and reckless move that seriously trampled on the one-China principle and undermined the fundamentals of China-US relations, leading to a series of countermeasures from Beijing including sanctioning Pelosi and her immediate family members, halting military and climate change talks between the two countries.

Chinese officials strongly condemned the latest visit made by the US lawmakers, which is considered as a blatant provocation that ignored the repeated warnings and opposition from the Chinese side following Pelosi’s visit. The Chinese Foreign Ministry said on Monday that China will take resolute measures to safeguard its sovereignty and territorial integrity.

The latest visit by the US lawmakers showed that the Biden administration has not learned a lesson from Pelosi’s reckless trip that caused growing risks to the Taiwan Straits and turbulences to the global order, some Chinese experts said. It also showed that the White House is losing the ground to the US Congress in terms of taking the initiative and overall control over the Taiwan question, fully exposing its incapacity and decline.

Such a highly dangerous tendency of using Taiwan as a pawn to challenge China’s red line also shows the true intention of the US – to encourage the “Taiwan independence” and distort the true meaning of the one-China principle, some experts said. They also believed that this is a typical example of the US trying to create a crisis to undermine China-US relations and highlight its so-called dominance in the Western Pacific region.

The Ministry of National Defense spokesperson Wu Qian said on Monday that the joint combat exercises and training conducted by the PLA Eastern Theater Command in the sea areas and airspace around the island is a resolute response and a solemn deterrent to the US-Taiwan collusion and provocation.

Taiwan is part of China, and the Taiwan question is purely China’s domestic affair and brooks no foreign interference, Wu said. He warned the US and the DPP authorities in Taiwan that “seeking independence” with US support will go nowhere, and using the Taiwan question to contain China is also doomed to fail.

The PLA will continue to train soldiers and get prepared for war, resolutely safeguarding China’s sovereignty and territorial integrity, and will resolutely crush any form of attempt for “Taiwan independence” by secessionists or foreign interference, Wu said.

Chinese State Councilor and Foreign Minister Wang Yi elaborated on Monday the historical context of and China’s solemn situation on the Taiwan question during a video meeting with Geneva-based envoys who are curretnly visiting China, saying that in response to each and every provocation blatantly launched by the US, China has to take necessary and legitimate countermeasures.

This is practicing the legitimate right of safeguarding China’s sovereignty and territorial integrity and also upholding the principle of non-interference in internal affairs, which is the “golden rule” of state-to-state relations and the “magic weapon” for developing countries, Wang said.

Wang Wenbin, spokesperson of the Chinese Foreign Ministry, said on Monday that lawmakers including Markey ignored the solemn representation and firm opposition from the Chinese side and insisted on visiting China’s Taiwan region, which blatantly violated the one-China principle and the three China-US joint communiqués. It’s an intrusion of China’s sovereignty and territorial integrity, which sends the wrong signal to the secessionists in the island.

China urged the US again to uphold the one-China principle and the joint communiqués, and to properly handle the Taiwan question with cautious attitude, Wang said. The US should stop hollowing and distorting the one-China principle to avoid further damage to the China-US relations and the stability in the Taiwan Straits, and China will take resolute measures to safeguard its sovereignty and territorial integrity, he said.

Some people in the US did not learn a lesson from the consequences of Pelosi’s provocative visit to Taiwan, and the DPP authorities continue to collude with external forces to seek “Taiwan independence” and such ill-intentioned attempts are doomed to fail, Ma Xiaoguang, spokesperson of the Taiwan Affairs Office of the State Council, said on Monday commenting on US lawmakers visiting Taiwan.

Although those US lawmakers are not as high-ranking as Pelosi, their visit delivered a strong signal of provocation, challenging China’s core interests, and those who go on with their provocations should definitely be sanctioned, Wu Xinbo, dean of the Institute of International Studies at Fudan University, told the Global Times on Monday.

“No matter they are US lawmakers or lawmakers from the UK or Germany, as long as they visit Taiwan as lawmakers, such visits should be taken as provocations and those lawmakers should be put onto China’s sanction list,” Wu Xinbo said.

“Imposing sanctions on those who have challenged our core interests should become a routine practice. Those who intend to follow Pelosi’s path need to reconsider the potential risks,” Wu Xinbo said. 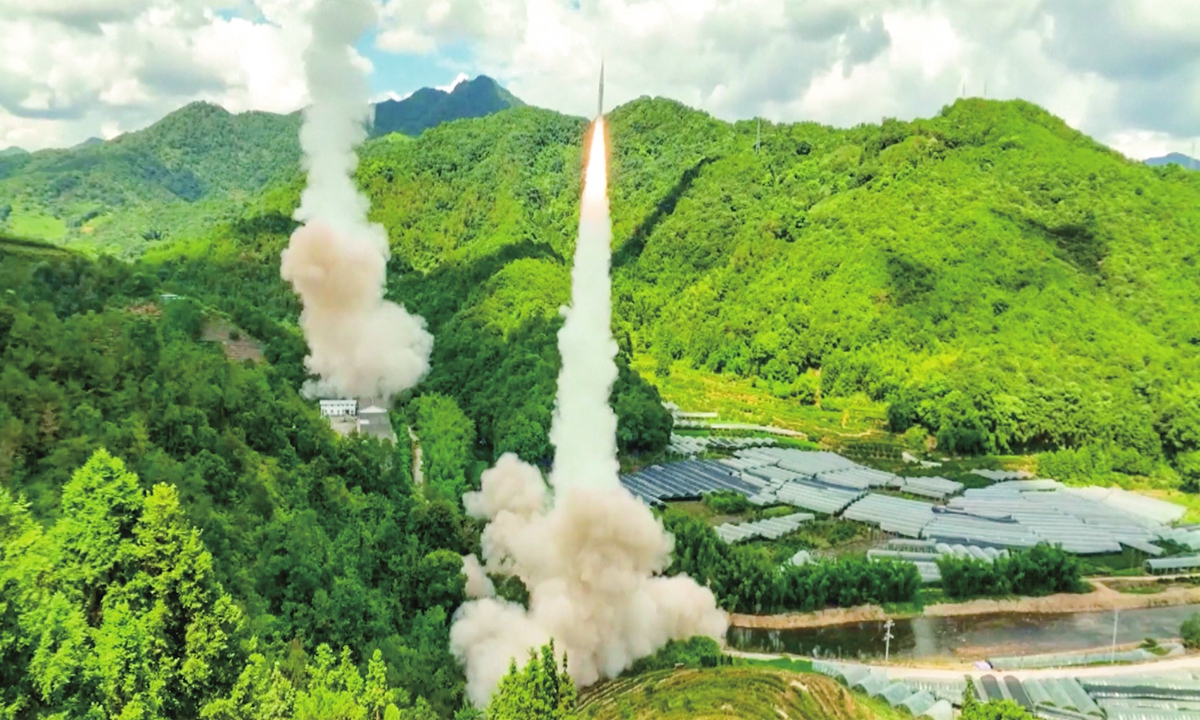 Besides the countermeasures such as sanctioning political figures who challenge China’s redline, the latest military drills surrounding the Taiwan island also serves as a strong signal of deterrent, especially after the PLA had concluded its unprecedented “Taiwan encirclement” drills and began conducting regular combat readiness security patrols in the Taiwan Straits, which stunned secessionists and external forces as its precision strike and area denial capabilities being fully proved.

In a video clip released by the PLA Eastern Theater Command, a pilot looked down at Penghu Islands during the ongoing drills on Monday.

The Chinese government announced that Taiwan and the adjacent Penghu Islands had been restored as parts of China’s territory in 1945. Thus, Taiwan’s legal status as a part of China is irrefutably confirmed.

The “Taiwan encirclement” drills have not finished, as it’s just concluded one stage, Song Zhongping, a Chinese mainland military expert and TV commentator, told the Global Times on Monday.

“As our military exercises in East Sea, the Yellow Sea, the South China Sea and Bohai Sea continue, when there’s a problem in the Taiwan island, we’ll continue our ‘Taiwan encirclement’ drills to safeguard our sovereignty and territorial integrity,” he said.

China has its own pace to resolve the Taiwan question and to realize the complete national reunification, and the previous unprecedented “Taiwan encirclement” drill is widely viewed as a rehearsal of the reunification operation with conventional missiles flying over the island for the first time and PLA forces entering an area within 12 nautical miles of the island, and the so-called median line no longer exist.

“The current military exercises and drills are being held on a regular and long-term basis in accordance to the demand. The combat readiness patrols and real-combat drills can be switched anytime we need to help enhance the war preparedness capabilities,” Song said.

Some experts also considered that military drills surrounding the island won’t be decided nor influenced by certain foreign lawmakers’ visits to Taiwan.

“In military, we’re going to enhance our control capability over the cross-Straits situation and the overall security, and the military operations are conducted for stunning the secessionists and boosting the reunification as top priorities,” Wu Xinbo said.