Britain’s 42 Coups Since 1945: Over 40 Attempts to Remove Foreign Governments in 27 Countries

Mark Curtis, Global Research, January 16, 2023 — The UK has planned or executed over 40 attempts to remove foreign governments in 27 countries since the end of the Second World War, involving the intelligence agencies, covert and overt military interventions and assassinations, Declassified has found.

Probably the most well-known coup staged by British intelligence since 1945 was the overthrow of Iran’s democratically-elected government in 1953 – an operation planned with the CIA. But the UK has been involved in at least 41 other attempts to overthrow governments since the end of the Second World War.

These have ranged from intelligence-led to military-led operations, both overt and covert, with some being successful from Whitehall’s standpoint, while many have failed to achieve their objectives.

Many remain little known, while others are shrouded in secrecy, with only a few details having emerged.

The year 1953 was in fact a busy one for Whitehall planners since, as well as removing Mohammed Mossadeq in Iran, they sent a gunboat to overthrow the democratically-elected government in British Guiana, led by the popular nationalist Cheddi Jagan.

At the same time, they were promoting anti-government propaganda operations in another Latin American state, Guatemala. That British campaign prepared the ground for the 1954 CIA-engineered overthrow of another nationalist, and elected government, under Jacobo Arbenz.

As if this wasn’t enough, UK covert operatives were also busy at the time planning the removal and assassination of Egypt’s president Gamal Abdel Nasser, in various schemes after Nasser took power in a 1952 nationalist revolution.

Nasser’s assumption to power challenged Britain’s position in the Middle East and the stability of the repressive, conservative monarchies – many of them near-medieval in nature – that Whitehall, then and now, was propping up, especially in the Gulf region.

Indeed, it was such nationalist forces that were the UK’s main enemies in the so-called ‘third world’ after 1945, even as mainstream journalists and academics endlessly wrote about the Soviet threat and the Cold War. 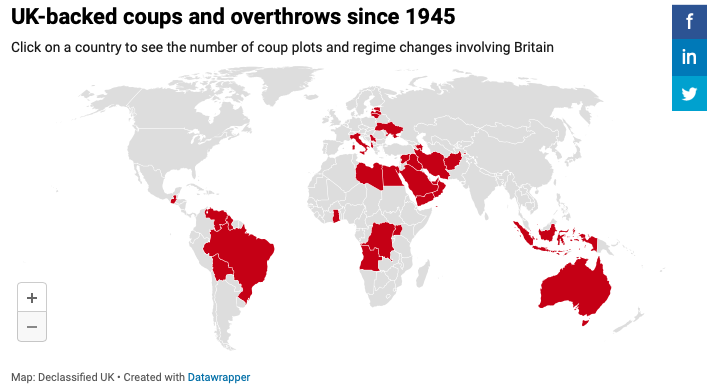 In the 1950s, British regime change planning was relentless, with further known operations drawn up to promote uprisings against nationalist governments in Syria in 1956 and in 1957, neither of which were fully implemented.

One plan that was put into effect, however, was the covert war instigated with the US in Indonesia – intended to stimulate an uprising against President Sukarno, beginning in the country’s myriad outer islands. It remains one of the UK’s least known covert operations, and eventually failed.

Sukarno was overthrown a decade later, however, in one of the 20th century’s worst bloodbaths, enacted by the Indonesian military under General Suharto. The declassified files show the UK backed the 1965/66 slaughters of communists, leftists and ordinary villagers, which killed hundreds of thousands of people.

The UK conducted media operations to counter Sukarno and delivered covert messages to the Generals assuring them of the UK’s acquiescence in their takeover. Suharto ruled Indonesia, often resorting to sheer brutality, for three decades.

Throughout the 1960s there was little let-up in Whitehall officials’ belief they could put in power whoever they wanted, at least in certain countries.

In 1961, evidence suggests that they had a hand in the murder of Patrice Lumumba, Congo’s first democratically-elected leader who was subject to a vicious MI6 and CIA campaign to overthrow him before he was captured and tortured.

Media operations by the Foreign Office’s notorious Information Research Department – a propaganda unit set up in 1948 – also helped overthrow Brazil’s João Goulart in 1964. His programme of ambitious land reform and extending the vote to Brazil’s illiterate population incensed the country’s political, military, and business elite – and the CIA which eventually helped remove him.

By now, Britain was making sure that Cheddi Jagan – who had made a comeback after being removed ten years earlier – could not consolidate his power in British Guiana, as officials rigged the system in a constitutional coup to ensure he could not be elected again.

The mid-1960s was also an era of palace coups in the UK’s client states in the Gulf region.

In 1964, British military officers based in Saudi Arabia, who were advising the Saudi National Guard, helped Prince Faisal remove his older brother, King Saud. The following year, the British sponsored the removal of the ruler of the emirate of Sharjah – Saqr bin Sultan al-Qasimi – in favour of another – Khalid bin Mohammed Al Kasimi.

Then in the following year, they conducted a similar exercise in another emirate, Abu Dhabi, again replacing its ruler with his brother – Zayed bin Sultan Al Nayhan, the father of the current president of the United Arab Emirates.

In 1970 came a coup in another closely-controlled British puppet state – Oman – that was organised by British officers. It put in power Sultan Qaboos, who ruled with an iron fist for a further 50 years until his death in 2020. 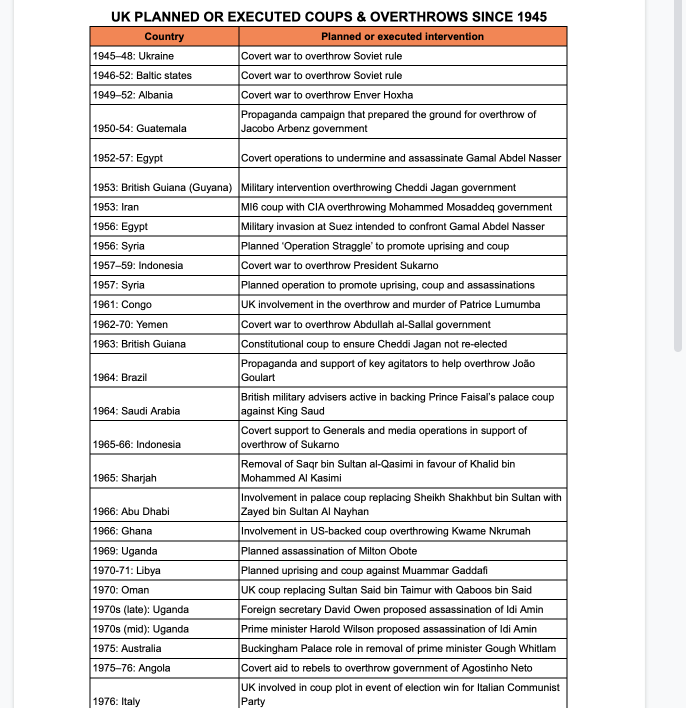 Assassinating Gaddafi – and a few others

Almost as soon as Muammar Gaddafi seized power in a military coup in Libya in 1969, nationalising British oil operations, Britain tried to remove him. First came a planneduprising and coup in 1970-71, which was not, however, carried out.

Over a decade later, the UK offered its air bases to US warplanes conducting airstrikes on Tripoli, Libya’s capital, that targeted Gaddafi’s compound, killing a few dozen people but not him.

Britain tried again 10 years later, in 1996, when MI6 secretly funded Islamist militants to assassinate Gaddafi in the city of Sirte, an operation that again killed bystanders but not the Libyan ruler.

In 2011, Britain got him, launching a major air campaign and covert support to Islamist militants on the ground to finally overthrow the regime, with Gaddafi being killed in October of that year.

However, it wasn’t only Gaddafi, Nasser and Lumumba who are believed to have been targeted for assassination, according to evidence that has emerged. Former MI6 officer Richard Tomlinson alleged that MI6 drew up plans to kill Yugoslav leader Slobodan Milosevic in 1992.

Then there is Uganda. In 1969, it has been contended that the UK planned the assassination of President Milton Obote – who Britain confronted because of his nationalist economic policies and his opposition to apartheid South Africa.

Throughout the decades of trying to liquidate Gaddafi and others, Britain instigated other operations to remove governments, about most of which little information has emerged and which remain murky.

While Africa, Asia and Latin America were the main chessboard for British planners, Europe was not off the agenda. In 1976, evidence points to British involvement in a coup plot to topple the government in Italy, at a time when the Italian Communist Party (PCI) looked as if it might win or influence the next government.

Reports also suggest MI6 was involved in two coups in Azerbaijan, in 1992 and 1993, to promote British – specifically BP’s – oil interests in the country. Few details are known about these episodes. One of the later media reports detailing the operations was pulled, presumably the impact of a government D-Notice, and little has emerged since.

In the past decade, UK covert operatives have remained active in attempting to remove governments. Bashar Assad of Syria has been the target of a years-long British operation to train and support the armed opposition, and to promote media and aid operations in support of regime change.

In Latin America, Declassified has revealed that the British ambassador supported the right wing coup against President Evo Morales in 2019, and that the UK’s interests in securing access to lithium played a key role.

In Venezuela, the UK, along with several other Western countries, recognised an alternative government to Nicolas Maduro in 2019, backing Juan Guaido as ‘interim president’. Britain has also recently promoted media and NGO projects to back the Venezuelan opposition.

This has joined the ranks of failed UK regime change operations, since in early 2023, Guaido was forced to quit when Venezuela’s Congress dissolved his ‘government’.

This list of coups and overthrows is an emerging one – further examples and details will no doubt trickle out in the future. What this list does not include are those coups that the UK welcomed but did not play a direct part in, as far as is known.

British officials also gave strong support to Idi Amin when he seized power in Uganda in 1971, and may have had a hand in his takeover, after long wanting to oust his predecessor, Obote.

The following decade, Margaret Thatcher’s government strongly supported the US invasion of Panama in 1989, intended to overthrow Manuel Noriega. She also – reluctantly at first – publicly backed Washington’s intervention in Grenada in 1983, which removed the government of Maurice Bishop, who was subsequently executed.

Some of the British interventions have been against repressive, malign forces. In the early postwar years, the covert operations in Ukraine and the Baltic states were intended to promote uprisings against Stalin’s brutal emerging rule.

Iraq’s Saddam Hussein, another consistent British target from the 1990s, was a monster. But he began being a monster in the 1980s when the UK armed and traded with him to fight Ayatollah Khomeini’s Iran in the Iran-Iraq war.

Libya’s Gaddafi was hardly benign but his tyranny, which brought development to many in Libya, might seem positive compared to the terrorism, anarchy and ongoing war following the British intervention in 2011.

But many British coups have specifically targeted progressive, popular forces – deliberately to remove them in favour of governments promoting British and Western economic interests.

Mossadeq’s nascent democracy was overthrown for the benefit of the Anglo-Iranian Oil Corporation, a forerunner of BP. Cheddi Jagan’s government was removed because his economic policies, that benefitted Guyana’s poor, threatened British sugar and bauxite interests.

Lumumba, Arbenz and Goulart were others that presented a leftist development model as an alternative to pro-corporate policies promoted in London and Washington, that offered positive prospects for the millions of poor people in the developing world.

It was largely for this reason that they became victims of British, and American, power.

Mark Curtis is the editor of Declassified UK, and the author of five books and many articles on UK foreign policy.