Zero Hedge, Global Research, October 3, 2022 — Ever since the recent unprecedented sabotage attacks on the Russia to Europe Nord Stream pipelines, the central question has continued to remain who did it and correspondingly cui bono?

Just when speculation and an avalanche of theories have inundated the web on an array of international outlets, the Biden administration has bluntly (and apparently lacking self-awareness) boasted that the pipeline bombings present an “opportunity”.

Secretary of State Antony Blinken said in a Friday joint press briefing with Canada’s top diplomat that the damage and disruption to the pipelines are being seen in Washington as a “tremendous opportunity” to greatly reduce European energy imports on Russia.

“I think first it’s important to make clear that these pipelines – that is, Nord Stream 1 and Nord Stream 2 – were not pumping gas into Europe at this time.  Nord Stream 2 never became operational, as is well known.  Nord Stream 1 has been shut down for weeks because of Russia’s weaponization of energy.”

He at the same time touted that the Untied States has now become “the leading supplier of LNG [liquefied natural gas] to Europe,” stressing too that the Biden administration is helping to enable European leaders to “decrease demand” and “speed up the transition to renewables.”

Tellingly, in that single section of comments while speaking alongside his Canadian counterpart, Foreign Minister Mélanie Joly, Blinken had repeated the word “opportunity” while highlighting the European energy crisis no less than three times.

According to @SecBlinken, the Nord Stream pipeline bombing “offers tremendous strategic opportunity for the years to come.” Too bad that this tremendous opportunity for DC bureaucrats will come at the expense of everyone else, especially this coming winter. pic.twitter.com/T2eacQUuBF

Attack on Nord Stream Kills Prospects for Dialogue in Ukraine

Canada’s Joly for her part pointed the finger at Russia for sabotaging its own pipeline during a panel discussion the same day, telling an Atlantic Council conference that the world is “not naïve” about who is responsible for the acts of “sabotage”. She’s the latest top official of a NATO government to do so.

But the Canadian foreign affairs minister stopped short of naming Russia directly in the exchange:

“At this point we’re still investigating, but obviously we want to make sure that we do things the right way, but we’re not naïve,” she said.

“You’re not naïve as to who’s behind it?” Sciutto responded.

“As I said, we won’t speculate but at the same time, we want to make sure that — the world needs to understand that this is very important European infrastructure that was sabotaged,” the minister added.

On the other side of the question of culprits and the crucial cui bono question, The American Conservative offers the following commentary:

One could certainly see why sabotaging Nord Stream benefits the US. We didn’t want Europe to get Nord Stream in the first place, because it would make Europe dependent on Russian gas. This is perfectly reasonable, from an American point of view. However, if Washington sabotaged those pipelines in the middle of the Ukraine-Russia war, that would mean an insane escalation of the war, to sabotaging critical infrastructure.

Think about it: if Russia can’t deliver gas to Europe anyway, because the pipelines are too damaged, that makes it harder to make peace and restore energy flow to Europe. This fits Washington’s policy goals. That doesn’t mean Washington is responsible for this sabotage, but there’s a lot more reason for Washington to have blown the pipelines up than for Russia.

The publication continues, “Prominent Polish politician Radek Sikorski understood this, firing off this ill-advised tweet as soon as the news broke.”… 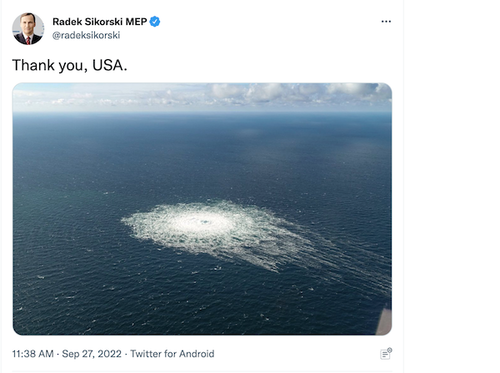 Finally, we note that China state-affiliated media mouthpiece could not resist commenting on Blinken’s apparently cluelessly ironic comments, saying what much of the rest-of-the-world is perhaps thinking…

“I think first it’s important to make clear that these pipelines – that is, Nord Stream 1 and Nord Stream 2 – were not pumping gas into Europe at this time.  Nord Stream 2 never became operational, as is well known.  Nord Stream 1 has been shut down for weeks because of Russia’s weaponization of energy.

What we’ve been doing – and we’ve also been working on this together for many, many weeks as we saw the Russian aggression in Ukraine and as we saw the ongoing weaponization of energy by Russia – is to work very closely with European partners as well as countries around the world to make sure that there is enough energy on world markets.  And so we’ve significantly increased our production as well as making available to Europe liquefied natural gas.  And we’re now the leading supplier of LNG to Europe to help compensate for any gas or oil that it’s losing as a result of Russia’s aggression against Ukraine.

We’ve worked to release oil from our Strategic Petroleum Reserve to make sure as well that there is oil on the markets and to help keep prices down.  We’ve engaged with the European Union and established months ago a task force to work directly with Europe on ways to decrease demand to help get through the winter, as well as to pursue additional supply and to find ways to speed up the transition to renewables even as we’re getting through this challenging period.  So all of that work is ongoing.

My own sense – and I mentioned this the other day – is, look, there’s a lot of hard work to do to make sure that countries and partners get through the winter.  Europe itself has taken very significant steps to both decrease demand but also look at ways to pursue the transition to renewables at the same time.  And ultimately this is also a tremendous opportunity. It’s a tremendous opportunity to once and for all remove the dependence on Russian energy and thus to take away from Vladimir Putin the weaponization of energy as a means of advancing his imperial designs.

That’s very significant and that offers tremendous strategic opportunity for the years to come, but meanwhile, we’re determined to do everything we possibly can to make sure that the consequences of all of this are not borne by citizens in our countries or, for that matter, around the world.”