Beyond Vietnam to Ukraine

In April 1967,  Martin Luther King Jr. delivered an eloquent and stirring denunciation of the Vietnam war and US militarism. The speech titled “Beyond Vietnam” is relevant to today’s war in Ukraine.

In the speech at Riverside Church, King talked about how the US had supported France in trying to re-colonize Vietnam. He noted, “Before the end of the war we were meeting 80% of the French war costs.” 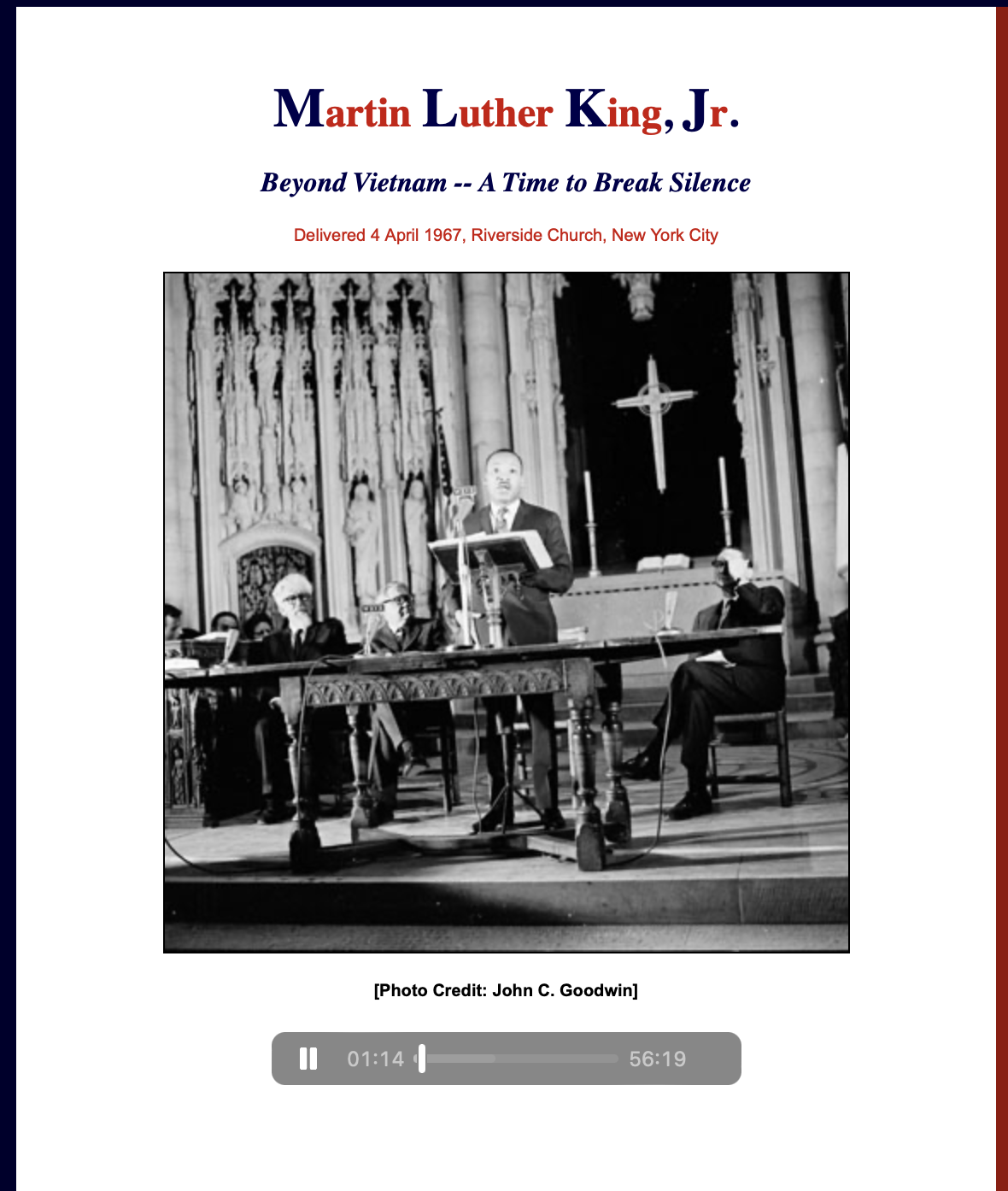 When France began to despair in the war, “We encouraged them with our huge financial and military supplies to continue the war.”

King went on to recall that after the French finally left Vietnam, the United States prevented the implementation of the Geneva Accord which would have allowed Ho Chi Minh to unite the divided country. Instead, the US supported its preferred South Vietnamese dictator.

The U.S. has played a similar role in blocking compromise solutions and international agreements to the Ukraine conflict. 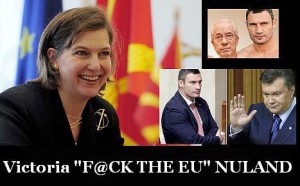 Following Ukraine protests in February 2014, the European Union negotiated an agreement between President Yanukovich and the opposition to have early new elections. The attitude of lead US official Victoria Nuland was crystallized in her secretly recorded comment,  “F*** the EU!”  Despite the agreement, a violent bloody coup led by ultra-nationalist Ukrainians was “midwifed”.

The ultra-nationalist coup government immediately started implementing policies hostile to the Russian speaking citizens of Ukraine. The coup and the new policies provoked the conflicts and resistance which have led to the situation today. The coup and policies were abhorred by a majority of Ukrainians, especially in eastern Ukraine.  The Russian speaking Ukrainian citizens of Crimea voted overwhelmingly to secede from Ukraine and re-unify with Russia.

The Minsk Accords of 2014 and 2015 were intended to resolve the conflict by granting some autonomy to the the Russian speaking sections in the eastern Donbass but keeping them within Ukraine.  Thanks to the admissions of two prominent former European leaders, Angela Merkel and Francois Hollande, we know that the West and their Ukrainian government puppet never intended to implement the Minsk Agreement.

Like the 1954 Geneva Accords regarding Vietnam, the 2014 and 2015 Minsk Agreements on Ukraine were never implemented because Washington did not want a compromise.

When Ukraine President Zelensky had negotiations with Russians in Turkey at the end of March 2022, UK PM Boris Johnson hurried to Kyiv to dissuade Zelensky from continuing serious negotiations to end the war.

Similarly, the US is providing the big majority of  weapons, military supplies and financial aid to Ukraine just as they did to France and then the puppet government of South Vietnam. And similarly the US and allies do not want a resolution to the conflict which might in any way be seen as win for Russia.

Rationalization vs Reality of  Wars in Vietnam and Ukraine

In April 1965, U.S. President Lyndon Baines Johnson (LBJ) explained why he was escalating US involvement in Vietnam. With an Orwellian touch, he titled the speech “Peace without Conquest” as he announced the beginning of US air attacks on Vietnam.  He explained that

“We must fight if we are to live in a world where every country can shape its own destiny and only in such a world will our own freedom be secure… we have made a national pledge to help South Vietnam defend its independence and I intend to keep that promise. To dishonor that pledge, to abandon the small and brave nation to its enemies and the terror must follow would be an unforgivable wrong…We are also there to strengthen world order… To leave Vietnam to its fate would shake the confidence of all these people in the value of an American commitment and in the value of America’s words.” 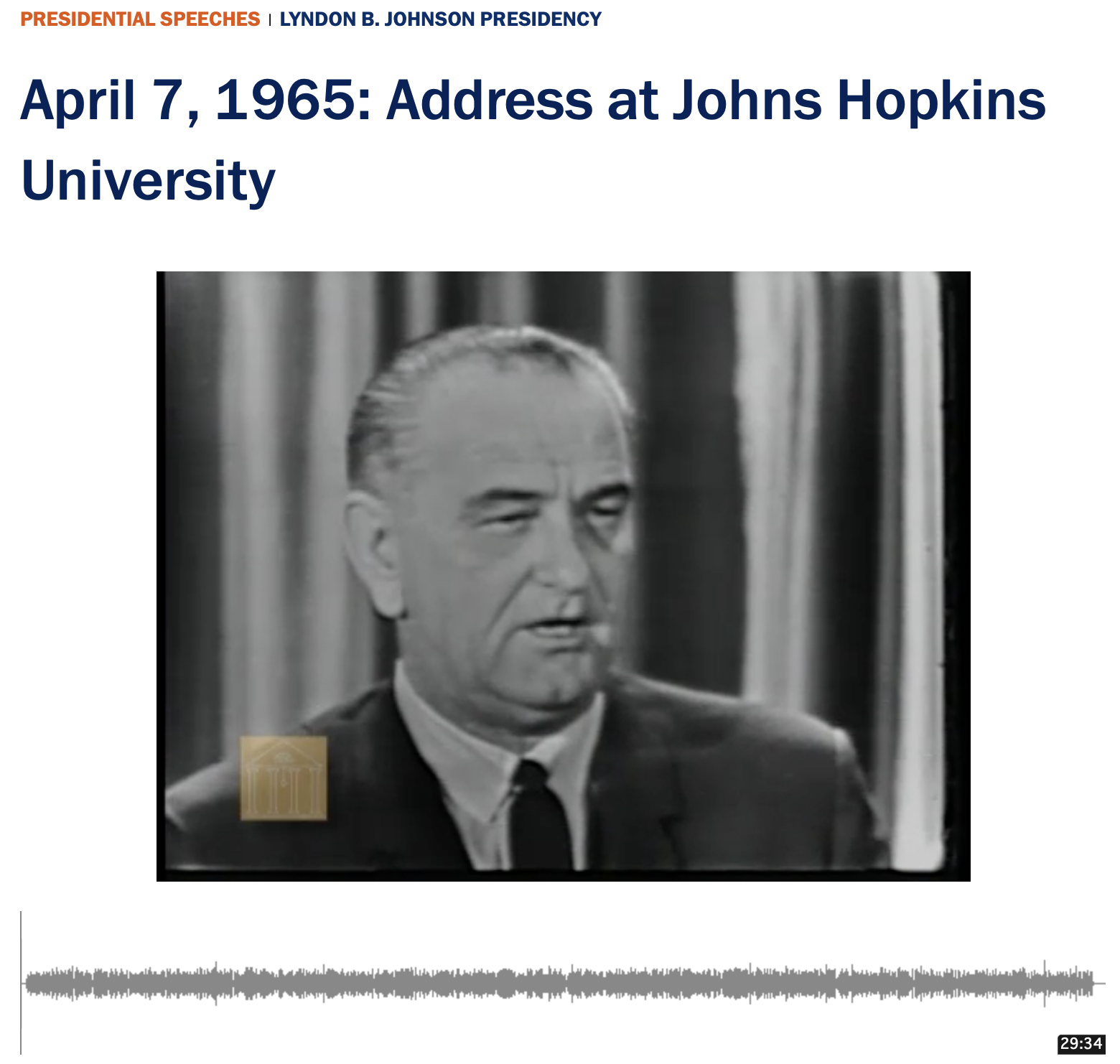 President Biden and administration leaders  sound similar to LBJ  in the early stage of the Vietnam War. In his remarks to Congress asking for additional funding for Ukraine, Biden said,

“We need this bill to support Ukraine in its fight for freedom…. The cost of this fight is not cheap, but caving to aggression is going to be more costly if we allow it to happen…Investing in Ukraine’s freedom and security is a small price to pay to punish Russian aggression, to lessen the risk of future conflicts.”

Both Russia and the US now acknowledge that the conflict in Ukraine is between Russia and NATO (led the US). Ukraine is a proxy for the US which promoted the 2014 coup and has been pumping weapons into Ukraine ever since. US Secretary of Defense Lloyd Austin has been explicit: “We want to see Russia weakened.” The Ukrainian Defense Chief says they are fighting “to fulfill NATO’s mission.”

These wars are unnecessary

Just as the US could have lived with Vietnam under Ho Chi Minh leadership without the war, the US could live with Ukraine being a neutral country and bridge between east and west, Russia and western Europe.

However, as ML King observed 54 years ago, that was not (and still is not)  US policy.

“The war in Vietnam is but a symptom of a far deeper malady within the American spirit.” He went on to name many other countries which are victims of  US intervention and aggression. He said, “And if we ignore this sobering reality we will find ourselves … marching …and attending rallies without end unless there is a significant and profound change in American life and policy. Such thoughts take us beyond Vietnam…”

In 1965, when President Johnson announced the beginning of US air attacks on Vietnam, the war had been going on for many years.  The US kept incrementally increasing its commitment – from political support to advisors and trainers and special operations. In spring 1965 “only” about 400 US soldiers had died in the conflict. The war was not yet  widely unpopular. Americans who protested against the Vietnam War were a small minority.

We may be at a similar or earlier point in the conflict with Russia via Ukraine. While many tens of BILLIONS of dollars has been committed to Ukraine, plus advisors, trainers and other support, the US military has not yet been openly and actively deployed.

The incremental buildup in Vietnam ultimately led to over 58,000 Americans and three million Vietnamese civilians and soldiers being killed.  US prestige and influence was severely damaged.

“We have no honorable intentions in Vietnam …. The world demands a maturity of America that we may not be able to achieve. It demands that we admit that we have been wrong from the beginning of our adventure in Vietnam, that we have been detrimental to the life of the Vietnamese people.”

If the incremental buildup toward war with Russia is not stopped, it will be immeasurably worse than Vietnam. Already we are seeing tremendous destruction with Ukrainians and Russians dying by the thousands.  As with Vietnam in 1965, this could be just the beginning.

The costs of war and militarism

Dr King described the negative impact of the Vietnam war at home. He said

“A few years ago there was a shining moment …. It seemed as if there was a real promise of hope for the poor, both black and white, through the Poverty Program. There were experiments, hopes, new beginnings. Then came the build-up in Vietnam and I watched this program broken and eviscerated … I was increasingly compelled to see the war as an enemy of the poor and to attack it as such.”

Today, with nearly 60% of the federal discretionary budget going to the military, so called intelligence and nuclear weapon modernization, the situation is even more stark.  While US infrastructure corrodes, homelessness, personal debt, suicides and addictions increase. Instead of spending resources improving the lives of ordinary people, the government is pouring borrowed billions into another unnecessary war.

Western media portrayed  the US and South Vietnam winning the war in South East Asia until the 1968 Tet offensive exposed the lies and reality. Similarly,  western media portrays Ukrainians winning the war midst overwhelming Ukrainian public support. In reality, Russia and the  secessionist areas control large areas and will advance in the near future. Ukrainian losses are already huge.

The idea that all Ukrainians love the West and hate Russia is false. As an indication of the  mixed sentiments, the country having received the MOST emigrants from Ukraine is Russia. While a small number continue from Russia to west European countries, the big majority stay in Russia with many awaiting the end of warfare.

Just as South Vietnamese puppet leaders were built up the US for political reasons, so is Ukrainian President Zelensky. His speeches are written by Washington insiders. Largely censored from the media, Zelensky has overseen the imprisonment, torture and killing of opponents. The largest opposition party has been banned.  Many Ukrainians oppose his policy and continuation of the war.

Ukrainians have become cannon fodder for the US geopolitical goals, just as the South Vietnamese were.

Will the US and allies continue to escalate the conflict in Ukraine, to “double down” on an intervention half way around the world with the goal of hurting Russia? Have we learned nothing from Vietnam and subsequent US/Western foreign policy disasters of the past 40 years?

“We as a nation must undergo a radical revolution of values…When machines and computer, profit motives and property rights are considered more important than people, the giant triplets of racism, extreme materialism, and militarism are incapable of being conquered… A nation that continues year after year to spend more money on military defense than on programs of social uplift is approaching spiritual death …..The Western arrogance of feeling that it has everything to teach others and nothing to learn from them is not just… Our only hope today lies in our ability to recapture the revolutionary spirit and go out in a sometimes hostile world declaring eternal hostility to poverty, racism and militarism.” 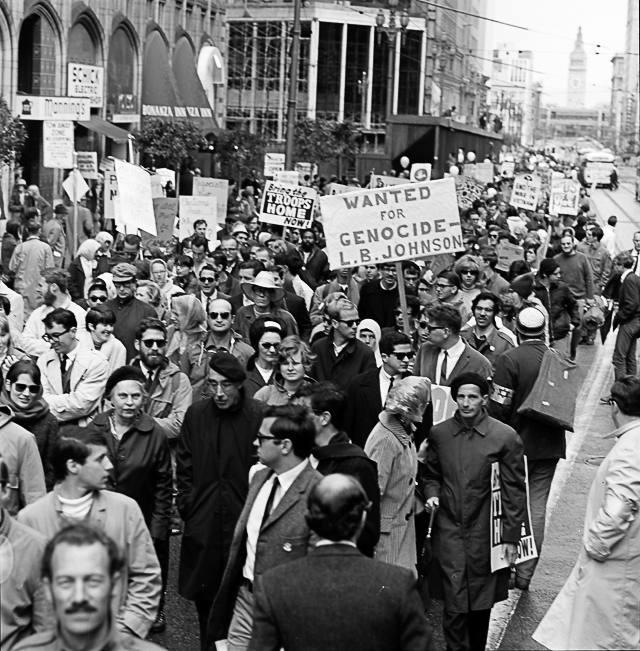 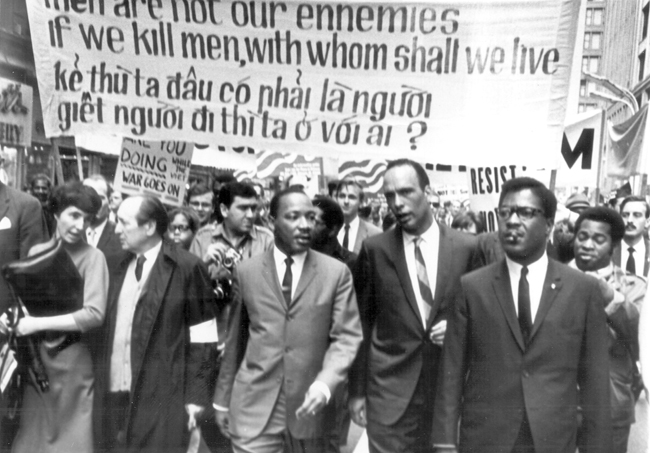 The Vietnam war continued for another seven years until the Vietnamese finally defeated and expelled the US military and their puppets. The disaster of the Vietnam War will be small compared to the disaster which may befall us all if US policy of attacking Russia through Ukraine is not stopped.

Rick Sterling is an independent journalist based in the SF Bay Area. He can contacted at rsterling1@protonmail.com. He is a regular contributor to Global Research.