“AGENDA 2063 is Africa’s blueprint and master plan for transforming Africa into the global powerhouse of the future. It is the continent’s strategic framework that aims to deliver on its goal for inclusive and sustainable development and is a concrete manifestation of the pan-African drive for unity, self-determination, freedom, progress and collective prosperity pursued under Pan-Africanism and African Renaissance The genesis of Agenda 2063 was the realization by African leaders that there was a need to refocus and reprioritize Africa’s agenda from the struggle against apartheid and the attainment of political independence for the continent which had been the focus of The Organization of African Unity (OAU), the precursor of the African Union; and instead to prioritize inclusive social and economic development, continental and regional integration, democratic governance and peace and security amongst other issues aimed at repositioning Africa to becoming a dominant player in the global arena.” – Quoted from African Union 2063 introductory paragraph.

There of course cannot be the realization of the Africa 2063 project until an internal and interstate relations framework between the 55 member-states which makeup the African Union (AU) reach a level of political equilibrium.

Notions surrounding the 2063 goals envision the greater economic, political and security links among all of the regions and states on the continent. 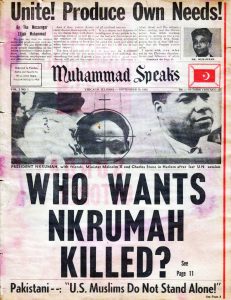 These ideas are by no means novel since the work of an earlier generation of African leaders such as Dr. Kwame Nkrumah advanced a theoretical program as early as 1945-1947, where in his book “Toward Colonial Freedom”, the future prime minister and president of Ghana placed the struggles for independence and development within a broader Pan-African and anti-imperialist ideology. Although the founding of the Organization of African Unity (OAU) did not meet the criteria established by Nkrumah and other anti-capitalist leaders and organizations as the ultimate expression of unification and socialism, since 1963, the concepts defining African governmental cooperation have advanced.

Recognizing the existential threat of Revolutionary Pan-Africanism to imperialism, the intelligence agencies and military  apparatuses of the western states sought to destabilize and physically remove those political parties and liberation movements which fundamentally attacked the structures of national oppression and economic exploitation. Subsequently, neo-colonialism became the dominant threat to self-determination and unity among the African people and other post-colonial societies globally.

During the OAU period of the armed phase of the African Revolution for the total liberation of Southern Africa and other geo-political regions, the Liberation Committee played an important role in coordinating material assistance to the freedom fighters. This state assistance to the liberation movements in Africa was a reflection of the broad mass sentiment on the part of workers, youth, revolutionary intellectuals, artists and farmers in support of a rapid process of decolonization.

According to Nkrumah in Toward Colonial Freedom:

“That under imperialism war cannot be averted and that a coalition between the proletarian movement in the capitalist countries and the colonial movement, against the world front of imperialism becomes inevitable. It is, therefore, in this alone that the hope of freedom and independence for the colonies lies. But how to achieve this? First and foremost, organization of the colonial masses. The duty of any worthwhile colonial movement for national liberation, however, must be the organization of labor and youth; and the abolition of political illiteracy. This should be accomplished through mass political education which keeps in constant contact with the masses of colonial peoples. This type of education should do away with that kind of intelligentsia who have become the very architects of colonial enslavement.”

These principles articulated during the post-World War II period must be merged with the contemporary existing realities of the African continent and the overall international situation. Therefore, the interference of imperialism into the internal affairs of the African people remains a major source of disunity and displacement among millions across the continent. 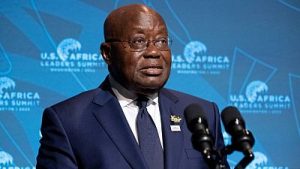 A recent diplomatic row between the West African states of Ghana and Burkina Faso provides an example of the role of imperialism in the 21st century. The current Ghana President Nana Akufo-Addo has been one of the few African heads-of-state who has ventured to criticize the Russian Federation’s special military operation in neighboring Ukraine.

The official position of the AU is characterized by the call for a diplomatic solution to the Ukraine crisis. This view has been a point of disagreement between the White House and the AU member-states since the beginning of the Ukraine conflict in late February 2022 up until the U.S. and African leaders summit held during mid-December.

It is no secret that the political tradition represented by President Akufo-Addo has been the antithesis of that which is represented by Nkrumah and his Convention People’s Party (CPP) which led the former Gold Coast to independence in 1957. At present Ghana has security relations with the Pentagon’s United States Africa Command (AFRICOM) while recently receiving clearance for the acceptance of a multi-billion-dollar loan from the International Monetary Fund (IMF).

Since the overthrow of the CPP government in February 1966, the Ghana experience with the IMF and other western-based financial institutions has been marred by the imposition of policies which stifle the growth of state structures and independent economic initiatives. The 600 industrial projects enacted by the Nkrumah-CPP government of the 1950s and 1960s were liquidated by the subsequent military and neo-liberal regimes which  have ruled Ghana for over five decades.

Burkina Faso, which has experienced two military coups during this year, has grown frustrated with the failure of the French military and AFRICOM to defeat the Islamist insurgency which has killed many Burkinabe soldiers and civilians. Hundreds of thousands of people have been displaced while the economy has not benefited from the close military alliance with  Paris and Washington.

Among the military government and the people, there is a burgeoning political orientation towards the Russian Federation. During the aftermath of the most recent coup which brought Ibrahim Traore to power on September 30, many were seen in the streets flying both Burkinabe and Russian flags. The French embassy was violently attacked by Burkinabe youth and burned along with other symbols of neo-colonialism inside the landlocked West African state.

Could this saber rattling on the part of the Ghana president be a gesture aimed at winning favor from the U.S.? Why would such a statement from Akufo-Addo while representatives from 49 African states were patiently involved in meetings with the White House, the Pentagon and State Department?

Both Ghana and Burkina Faso have gone through revolutionary phases within their post-independence political trajectory. Under Nkrumah between 1948, when he and other leading figures within the United Gold Coast Convention (UGGC) were detained after a national rebellion which swept the country early that year, until he was later imprisoned as leader of the CPP during 1950-1951. The transitional period of 1950-51 marked by the positive action general strike to 1957, the year of independence, remained focused on African unity. After 1957, there was the convening of two major conferences the following year, 1958, which called for the total independence and unification of independent Africa.

In Burkina Faso, Captain Thomas Sankara led a military coup of lower-ranking officers in 1983 which sought to initiate a revolution based upon many of the ideas already advanced by Nkrumah and other socialists namely Fidel Castro and Che Guevara of Cuba and Argentina. However, in October 1987, the Burkinabe Revolution was betrayed by elements within its leadership which fell victim to the machination of France and its allies in the West Africa region.

Sankara’s administration was overthrown at the time of his brutal assassination. A trial of the former leader, Blaise Compaore, who was used in the reversal of the Revolution and the cold- blooded murder of Sankara, has taken place inside the country. Compaore was himself removed from office in 2014 by a national uprising of the people in Burkina Faso. It was this fact of history which occurred decades after the October 1987 imperialist-instigated coup against Sankara.

Burkina Faso, Mali and the Central African Republic (CAR) have all invited the Wagner Group, a Russian-based military services firm, to assist them in countering the rebels which have proved to be a formidable adversary. Why should the security imperatives of modern-day Burkina Faso in regard to relationships with the Wagner Group undergirded by the popular solidarity in the country with the Russian Federation emerge as a cause for concern for the Ghana government?

Relations between West African and all continental states in order to be effective needs to be based upon mutual cooperation, interests and respect. Obviously, since the 1960s, the role of international finance capital has further underdeveloped Africa. These diplomatic confrontations involving the summoning and withdrawal of ambassadors from one African capital to another, does nothing to advance the struggle for actual security and genuine sovereignty.

The Economic Community of West African States (ECOWAS) has a noble mission of building unity among its 15 member-states. Such a conflict between Burkina Faso and Ghana further complicates the already delicate status of ECOWAS in its attempts to reestablish civilian rule in Mali, Guinea-Conakry and Burkina Faso.

To be continued in part II.