A Reckless And Provocative Visit By Pelosi To Taiwan

Paul Keating, Friends of Socialist China, July 28, 2022 — When the United States has a divided foreign policy on an issue of such grave importance, the world begins a slide onto very thin ice. 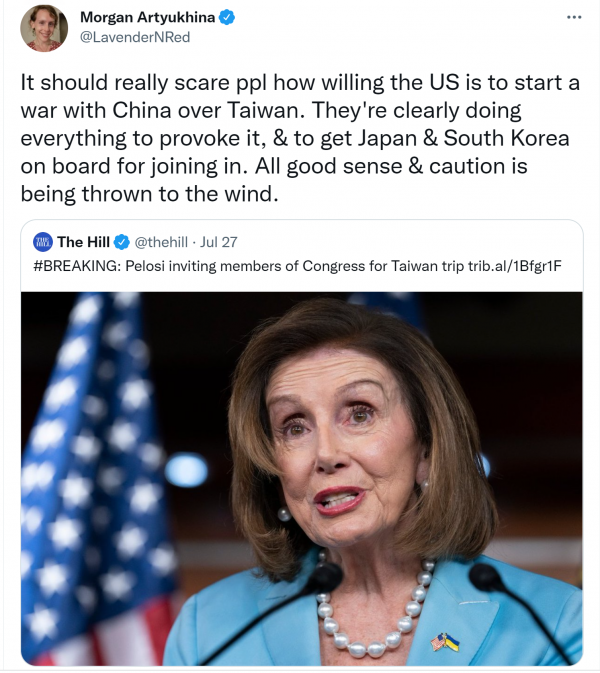 US House Speaker, Nancy Pelosi, the third-ranked figure in the American hierarchy – is reported to be planning a visit to Taiwan, despite the urging of Administration officials from her own party. It is hard to imagine a more reckless and provocative act.

Across the political spectrum, no observer of the cross-straits relationship between China and Taiwan doubts that such a visit by the Speaker of the American Congress may degenerate into military hostilities.

If the situation is misjudged or mishandled, the outcome for the security, prosperity and order of the region and the world (and above all for Taiwan) would be catastrophic.

A visit by Pelosi would be unprecedented – foolish, dangerous and unnecessary to any cause other than her own.

Over decades, countries like the United States and Australia have taken the only realistic option available on cross-straits relations. We encourage both sides to manage the situation in a way that ensures that the outcome for a peaceful resolution is always available.

But that requires a contribution from us – calm, clear and sensitive to the messages being sent. A visit by Pelosi would threaten to trash everything that has gone before.

When the United States has a divided foreign policy on an issue of such grave importance, the world begins a slide onto very thin ice.

Remarks by the British Foreign Secretary Liz Truss that China could engage in military aggression in the Pacific, encouraged by Russia’s contingent moves against Ukraine, are nothing short of demented.

And this piece of nonsense by Truss commanded the front pages of The Sydney Morning Herald in a piece written by the press gallery’s most  celebrated beat-up merchant, Peter Hartcher.

Truss said such a move by China  ‘could not be ruled out’.

And on those fleeting words, Hartcher pounced, carrying the notion to the readership of the Herald — and the Melbourne Age — that China and Russia are working in concert, justifying the headline, that ‘China could follow Russia into war’.

The irresponsibility of the story and Hartcher’s writing of it is breathtaking.

But it is a measure of how far the Herald has sunk in accommodating Hartcher’s extreme and unworldly positions — especially as they relate to China.

The underlying story is the government’s desperate promotion of Britain as a strategic partner of Australia in a policy of containment of China.

The reality is Britain does not add up to a row of beans when it comes to East Asia. Britain took its main battle fleet out of East Asia in 1904 and finally packed it in with its ‘East of Suez’ policy in the 1970s. And it has never been back.

Britain suffers delusions of grandeur and relevance deprivation. But there they were at Admiralty House kidding the rest of us that their ‘co-operation’ added up to some viable policy.

Truss would do us all a favour by hightailing it back to her collapsing, disreputable government, leaving Australia to find its own way in Asia.

Xi Jinping told the audience at Davos this week that ‘major economies should see the world as one community’.

Hardly the sort of sentiment that sits contemporaneously with someone about to spring an aggressive military action. A point perhaps way too subtle for the Herald.

Yet after the Pentagon cleared its throat and Pelosi played dumb, Biden not only is not be intervening but now fully owns this visit. Biden is trying the lame-brained move of attempting to persuade Xi, via a phone call this Thursday. From the Financial Times:

Joe Biden and Xi Jinping will hold a telephone call on Thursday….

The planned call would be only the fifth conversation between the two leaders since Biden became US president 18 months ago.

Biden and the Chinese president had been expected to discuss many contentious issues, from military challenges to technology competition. But those plans have been complicated by Pelosi’s intended visit to Taiwan in August….

The White House is extremely concerned that her visit could spark a crisis across the Taiwan Strait. Biden has sent top officials, including national security adviser Jake Sullivan, to explain the risks. But that has been complicated by the fact that Congress is independent and he has no formal power to block her visit.

Bloomberg reports that if Pelosi’s visit proceeds, it would happen “within days” of the Xi-Biden call.

As far as China is concerned, there is not putting lipstick on this pig. The US is demonstrating, just as Russia has charged, that it is not agreement capable. An April post summarized some of the recent cases of US overplaying its hand with China and not having the common sense to recognize its heavy-handed moves were backfiring:

….the US has tried at least twice (three times with China if you count the recent China-EU teleconference with Xi) to get China to side with the West against Russia, pushing China into “What about ‘no’ don’t you understand?” terrain. Rather than hewing to the convention of having summits only after groundwork was laid so that at least nothing visibly bad happens, Team Biden set out to pick a fight with China at their first get together, in Alaska in March 2021, with the US springing new sanctions on China the day before the session.

This humble blog was featuring at least once a week examples of Biden Administration continuing its eyepoking of China in our Links before the war broke out.

Then in March, Jake Sullivan was set to meet with Yang Jiechi in Rome and threatened China with sanctions. The pretext was disinformation in the form of a Financial Times story claiming that Russia had asked to buy weapons from China (this was clearly absurd because by the time the war had started would be way too late; Russia would have needed to procure and integrate equipment months prior).1 Needless to say, Yang didn’t give any ground.

So not taking no as an answer, Biden had the cheek to call Xi that very same week and ask for China’s help. Xi effectively said this wasn’t his problem: “He who puts the bell on the tiger is the one to take it off.” Biden also said he very much wanted better relations with China and gave lip service to the one-China policy in the chat. That allowed Xi to say he took that statement very seriously: What about all these American officials who were promoting a “wrong understanding” about Taiwan?…

I’m not double checking the dates, but my recollection is that it was shortly after the EU-Xi talk that the US announced new sanctions against China, mainly against officials accused of oppressing Uighurs…

And we expect them to side with us? It’s not the most important form of payback, but China has taken to stating regularly in official media that the war in Ukraine is America’s fault.

Needless to say, China is considering far more serious responses to the Pelosi provocation than just jerking America’s chain over Ukraine. But if the pink paper is any guide, the West is again in delusion land about what that might entail:

But he [Zack Cooper, an Asia expert at the American Enterprise Institute] said that if Pelosi proceeded, it would likely spark the biggest confrontation since the so-called third crisis in 1995 and 1996 when China fired missiles into waters around Taiwan to intimidate its government and citizens…..

The US is also concerned about dangerous Chinese military manoeuvres. Milley told the FT and the Associated Press in an interview this week that China had significantly increased the number of dangerous intercepts of US military aircraft by Chinese fighter jets over the South China Sea.

The White House and Pentagon are worried that China could send fighters to intercept Pelosi’s aircraft as she heads towards Taiwan in a provocative move that could bring US and Chinese aircraft into very close contact.

If the Chinese level of ire is any guide, having Chinese fighter jets deny Pelosi a landing in Taiwan is on the mild end of possible responses. If that were to happen and the plane was escorted to land in mainland China, I could see the Chinese rubbing salt in the wound by not letting anyone in the aircraft deplane.

China is considering how to use a Pelosi visit to set far more important precedents. Hu in the Global Times clip above mentioned declaring a no-fly zone or having PLA jets fly with Pelosi’s plane into Taiwan airspace. As the Global Times noted: “That would set a great precedent for the PLA to patrol above the island, which would be far more meaningful than Pelosi’s visit.”

As with provoking Russia, the US may be about to get what it sought with Taiwan and find out that the results are not to its advantage. And as an American, it’s depressing to see so much incompetence and arrogance on display.

Biden holds all the cards. He could have hauled Pelosi into his office and reminded her of the Supreme Court decision Haig v. Agee, which allows the Administration to cancel passports in matters of national security. The Pentagon warning gave Biden the needed cover, as do the additional threats by China of military action. Biden to Pelosi: “How dare you challenge me over this. I will cancel your passport if you force me to. You can then see me in court. If you want to precipitate a Constitutional crisis and hand this country to the Republicans at the midterms, be my guest. I’d rather have that than have you start World War III.” LBJ or Nixon would not have hesitated to have that sort of chat even with no favorable Supreme Court ruling in hand.